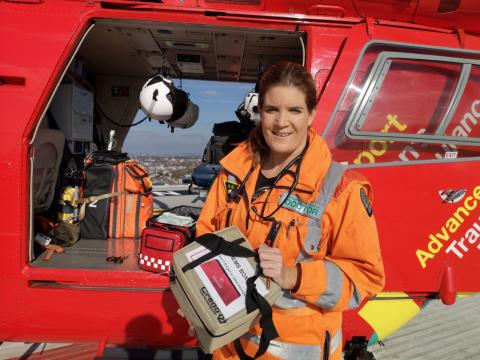 Our charity today launches a landmark new study in a first for UK air ambulances and pre-hospital care in an aim to reduce deaths due to catastrophic bleeding.

Thanks to funding from Barts Charity, Saracens and The Henry Surtees Foundation, the two-year study will look at the effectiveness of using a new blood product in critically injured patients suffering major trauma in London.  The product will consist of red blood cells and plasma, and can be given as a transfusion to patients at risk of bleeding to death before arriving at hospital.

Our service was the first in the UK to deliver red blood cell transfusion when we introduced “blood on board” to our aircrafts and rapid response cars in 2012.  Since then there has been a reduction in prehospital mortality from 34% to 19%.

Today’s launch is a next step in the journey to deliver a “whole blood” product which is hoped will reduce this figure further.  The need for this has been identified by clinicians from Barts Health NHS Trust and Queen Mary University of London who have identified approximately 100 people in London who each year suffer traumatic injuries that result in such serious bleeding that they may die before reaching hospital. 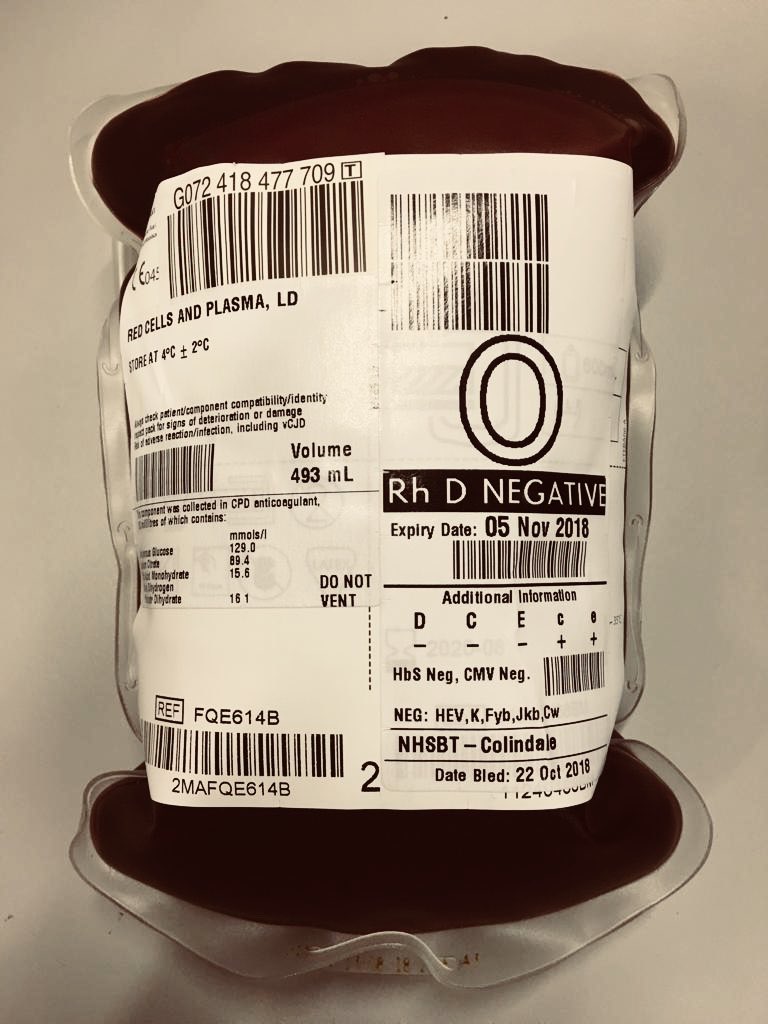 “Red cells & plasma” will specifically help this group of 100 patients as it contains essential clotting ingredients to help form stronger blood clots and replace lost blood volume.  This will improve the chances of survival to hospital.

Leading the study is Dr Anne Weaver, Consultant in Pre-Hospital Care at London’s Air Ambulance and Clinical Director of Trauma at The Royal London Hospital, Barts Health NHS Trust.  Speaking ahead of the start of the study Dr Weaver said;

“At London’s Air Ambulance we always want to give the gold standard of care to patients and the introduction of the new blood product will significantly improve the chances of survival for critically injured patients with severe blood loss, allowing them the chance to arrive at hospital.

"The whole team behind the project would like to thanks Barts Charity, Saracens, and The Henry Surtees Foundation for their generous support.  Thanks to them, we have the potential to save more lives in London.” 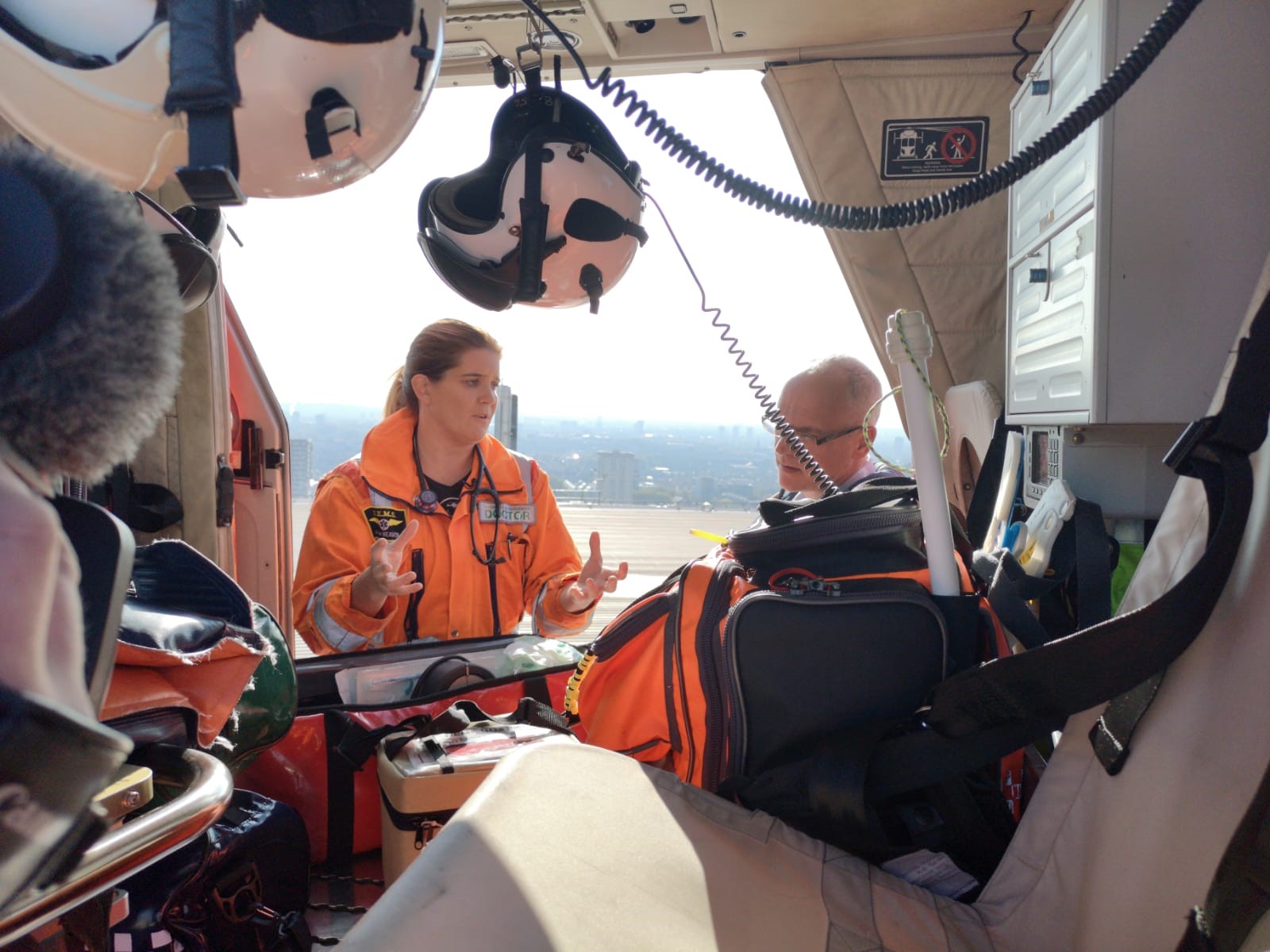 The product will be delivered clinically by our charity’s advanced trauma team. Our service’s unique exposure to severely injured trauma patients provides an opportunity to assess the clinical benefits of the new blood product.

“Experience from various military conflicts in the mid-20th century found whole blood to be a life-saving treatment for major bleeding but in order to meet the needs of non-bleeding patients in civilian practice, blood was separated into its various components for individualized transfusion.

“We now know patients who bleed from trauma require all components of blood and this product may offer a more effective way to stop bleeding. Further work is ongoing with NHS Blood & Transplant to develop a complete whole blood product that contains platelets — the small clotting particles in the blood that plug holes in damaged blood vessels and support the blood clot.”

This important trial has been supported by Barts Charity, Saracens, and The Henry Surtees Foundation. Barts Charity has provided £100k of funding, and their Director of Grants, Francesca Gliubich said;

“Dr Weaver and her team are working relentlessly to improve pre-hospital transfusion procedures, continuously improving survival rates for victims of traumatic injuries where heavy bleeding is involved. We are proud of supporting her in this pursuit of the best care for all trauma sufferers.”

“As Saracens official charity partner for 2018-19 we are extremely proud to be working with London’s Air Ambulance and its partners to deliver this vital piece of research. Saracens and Saracens Sport Foundation share a passion for high performance and pushing boundaries with London’s Air Ambulance and this whole blood research is a great example of the charity’s drive to help save the lives of even more Londoners.”

“With a background in motorsport, my father John Surtees spent his life largely chasing time round the race tracks of the world.  He knew that every second counts and none more so than for Air Ambulance services when accidents or illnesses occur.  With swift medical intervention provided by Air Ambulance crews, it gives a patient a far greater chance of survival and subsequent quality of life. The blood on board initiative is one that he whole heartedly supported”.

If successful, NHS Blood and Transplant hope to extend availability and practice across the UK to other providers, in order to deliver a clinical advantage to critically injured patients who otherwise would not survive.