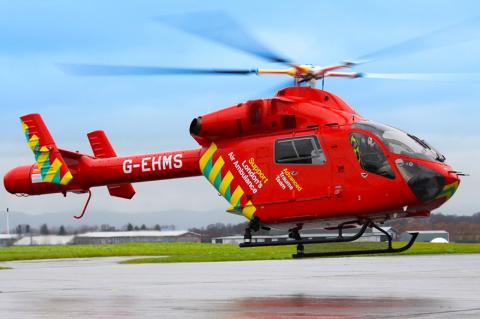 Our helicopter has returned from its annual service with an ingenious new look - emblazoned with emergency markings and key messages. The changing message on the tail boom details the number of critical missions attended by our medical team, currently at 28,502. We believe our helicopter is the focal point to create greater awareness of the vital life-saving interventions that are carried out by our service 24/7.

Graham Hodgkin, Chief Executive Officer of London’s Air Ambulance, said: “Our aircraft provides the most effective opportunity for us to deliver our key messages to London and potential donors, hence the strategic new look of our iconic asset. London’s Air Ambulance is a charity relying on your support, delivering highly specialist doctors and paramedics to the scene of critical injury, and the service is an essential part of London’s emergency infrastructure.

“Despite our extraordinary life saving work and prestigious reputation for medical excellence throughout the world, our charity remains relatively unknown within the city in which we operate.  A stronger, more powerful relationship with all of our supporters will be a key component of the current fundraising effort for a new, second helicopter this year.”

Martin Gilbert, Chief Executive of Aberdeen Asset Management and Patron of London’s Air Ambulance, said:“This remarkable charity saves lives across the capital on a daily basis and our decision to support it was an easy one.  It deserves the backing of everyone who lives, works and travels in London and I am incredibly proud to be one of its Patrons.”

Fact — We are an independent charity that relies heavily on donations from organisations and individuals.  We receive a significant contribution from the NHS, which includes the salary payments of our seconded doctors and paramedics.  London’s Air Ambulance is not part of the London Ambulance Service (LAS), although we work very closely together, alongside all the other emergency service providers to deliver the best possible patient care.

Fact — The helicopter is a rapid mode of transport that delivers an advanced trauma doctor and paramedic to a patient’s side within minutes of their accident.  The team performs life-saving procedures on scene, that are normally only found in a hospital emergency department, such as open chest surgery, blood transfusion and anaesthesia.  Typically, the doctor and paramedic escort the patient in a LAS land ambulance to the nearest trauma hospital, although the aircraft can be used if deploying to the Royal London Hospital via the helipad

Myth - Trauma is a rare incident

Fact - Trauma is the commonest cause of death for people age <45 including children, causing more lost years than cancer and cardiac arrest.  London sees some of the highest rates of trauma in the world and our advanced trauma team can be the difference between whether someone lives or dies, but also whether they recover to lead a relatively normal, healthy life.

Myth — London’s Air Ambulance has a number of helicopters

Fact — London is the only capital city in the world with only one helicopter for its air ambulance service.  Most other major world cities have 3 or 4 medical helicopters. We are currently fundraising for a second aircraft.