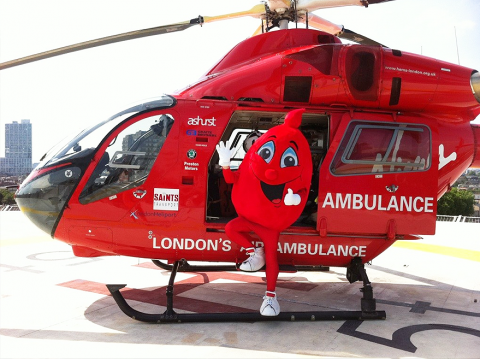 Today, London’s Air Ambulance, will make history as the first air ambulance in the UK to carry blood on board its aircraft and cars.

Every day in London, victims of major trauma are attended by London’s Air Ambulance. Many of these patients are suffering from catastrophic bleeding. Some die at the scene from blood loss and never make it to hospital.

Until today the highly trained medical teams have been unable to transfuse blood at the scene of the incident. Normal saline has been used as an alternative but, as it does not carry oxygen, it is not the ideal resuscitation fluid. Blood carries oxygen which is delivered to major organs including the brain. A pre-hospital blood transfusion may improve the patient’s chance of survival.

Blood is a precious resource and must be stored at a specific temperature in special containers.  The SCA Cool Logistics’ Credo, thermal range (“Golden Hour Boxes”), which is also used by the British Military, was found to be the most suitable following extensive research carried out with the Transfusion team at Barts and the London NHS Trust. Each box carried on board the aircraft and rapid response cars will carry 4 units of O negative (emergency) blood.

Dr. Anne Weaver, Lead Clinician for London’s Air Ambulance, said: “London’s Air Ambulance constantly strives to deliver cutting edge medical care at the scene of the incident. For several years we have felt that there was more we could do for patients suffering from serious bleeding. We have always provided highly trained, expert teams to care for injured Londoners and today we are pleased to further improve our service by carrying blood.

“We are a charity and with the support of the communities we serve, this is an example of the life saving advances that London’s Air Ambulance can deliver. I honestly believe that “Blood on board” will allow us to save more lives in London.”

The Mayor of London Boris Johnson said: 'London’s Air Ambulance has an international reputation for pioneering medical procedures, which have been adopted around the world. It provides a great service across the Capital and being able to carry blood on board means the team will be able to save even more lives.'