Through the wind and the rain on 11 March 2022, CIPHR’s sales team travelled on foot from Hampton Court Palace to Tower Bridge to raise vital funds for London’s Air Ambulance Charity, who attended to a colleague of theirs in 2020.

With a fundraising target and genuine appreciation to the service who saved their friend, 12 individuals took to the road and walked the distance of a London Marathon. “Without London’s Air Ambulance, Alice wouldn’t be here” said walk organiser, CIPHR employee, Katie Reis. “It’s as simple as that. Because of how quickly they got care to her side is why she was able to survive.”

Alice was cycling home from Streatham when she was hit by a car. After suffering a serious traumatic brain injury, Alice has had to relearn key life skills, from walking to swimming, to speaking and memory. She has made amazing progress but still has memory and speech impairments, and struggles with cognition and understanding. Recently, Alice was discharged from her rehabilitation centre. “When we heard Alice was going to continue her recovery at home, we offered to help raise some money to go towards her home care. But her parents asked us to raise money for London’s Air Ambulance Charity instead,” explained Katie.

They always say, on the unluckiest of days, Alice was still lucky, because she was attended to by London’s Air Ambulance.

So Katie and the CIPHR team planned the mammoth 26.2 mile walk to raise vital funds and support Alice’s family. Promotion on LinkedIn with Alice’s previous colleagues helped spread awareness of the cause, and donations started to flood in. 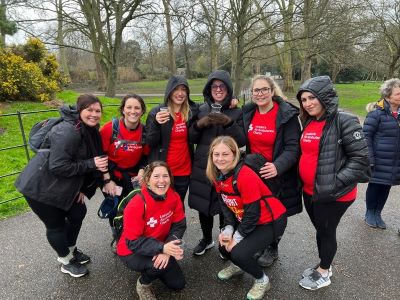 But the fundraising element was easy in comparison to the urban trek. “Everyone moaned the whole way!” joked Katie. “But it was an amazing team bonding session, and Alice was there at the halfway point in Battersea Park which was so lovely.”

It took nine hours and 23 minutes, but everyone completed the distance and was rewarded with a few drinks and a dinner at the end. The support for Alice, and for London’s Air Ambulance Charity, was paramount throughout the day.

“During the walk, we bumped into a London’s Air Ambulance flight paramedic!” exclaimed Katie. “It was the perfect pick-me-up to get us across the finish line and reminded us why we were there.”

A week later and blisters are still a regular discussion in the office, but we’re so grateful to all the walkers and to CIPHR. With an original target of £3,000, the CIPHR employees have raised over £10,000: an incredible gift that will fund at least four missions. London’s Air Ambulance can travel to anywhere in London inside the M25 within 11 minutes, bringing pre-hospital care to the roadside for the most critically injured patients.

“If there had been even a minute’s delay, Alice wouldn’t have survived,” said Katie. “It really is all thanks to London’s Air Ambulance.”

If you’re interested in doing some fundraising yourself, please get in touch via [email protected].