On 18 January 2022, St Christopher’s School – a nursery and pre-prep school in Epsom – dedicated a whole day to London’s Air Ambulance Charity, with fundraising, educational activities and a visit from our very-own doctor, Dr. Matt Snowsill.

One of the day’s key focus was a staged car crash scene in the school’s field, with a real car, a bench sawn in half, an upturned table, hazard tape protecting the scene and an injured teddy bear. Annie Thackray, Headteacher at St Christopher’s, said: “The children – and a lot of the parents – were so excited. They couldn’t wait to go see the scene and hear more about what London’s Air Ambulance does!” Dr Matt visited the scene with classes throughout the day and spoke about road safety, first aid and what happens when London’s Air Ambulance trauma team attend real-life accidents.

Dr Matt also ran an assembly in the morning for the whole school. “The children’s homework had been to design a new suit for Dr Matt, and the older children (aged six and seven) had also been tasked to write Dr Matt letters regarding his job, so when he arrived on the day, he already had quite a well-informed audience,” said Annie. “That was also a good way to encourage conversations at home – like why the suit needs to be bright. We’re cementing the home-school partnership and got everyone involved in the activities.” 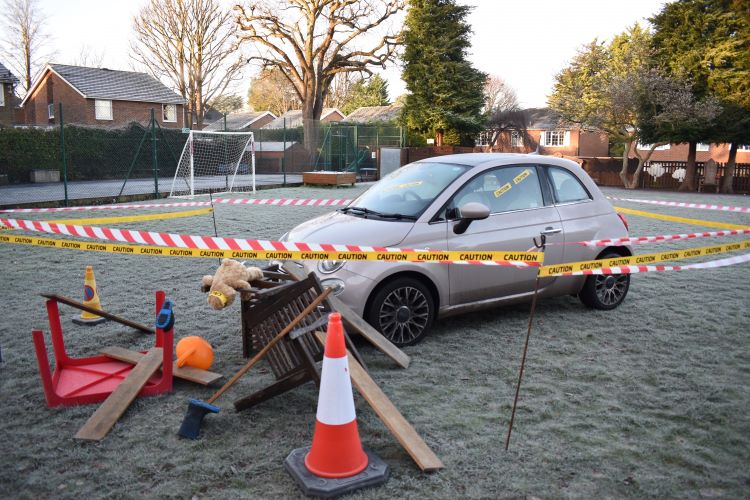 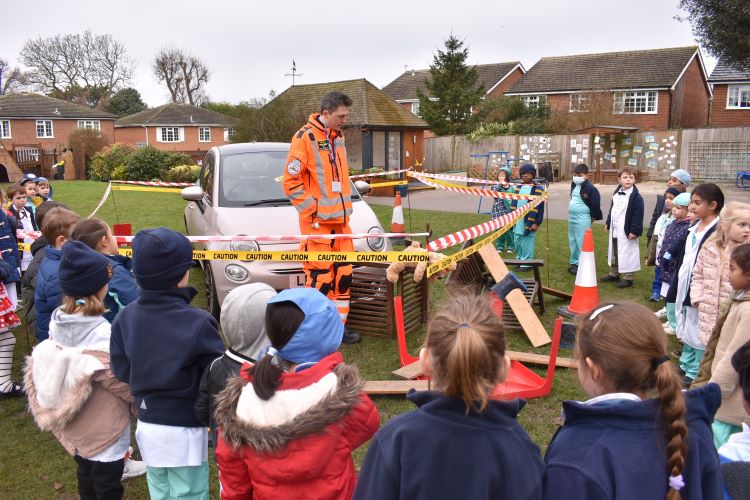 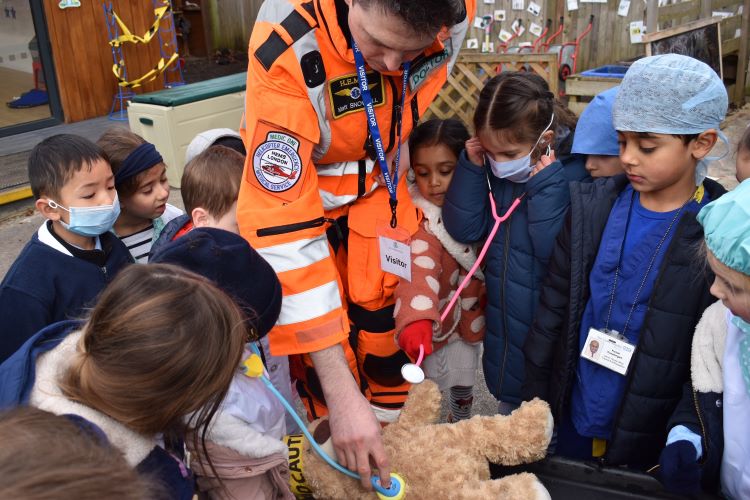 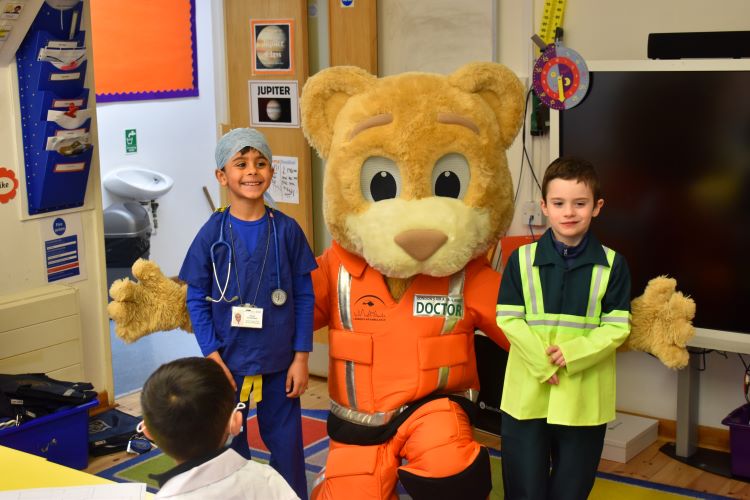 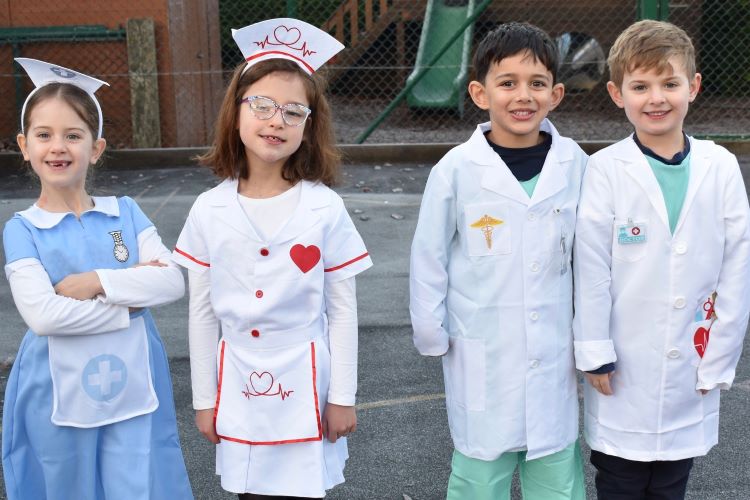 Every child was tasked to dress in an outfit related to the medical profession for the day, during which every child baked and iced a helicopter cookie. There was also a design and technology activity in the form of building pulleys to rescue injured patients. The nursery children made stretchers out of lolly sticks and card.

“We covered the day’s lessons, but in an entertaining, themed way”, explained Annie. “Within the day’s timetable there was a treasure hunt to find medical equipment stickers. In between the clues there were educational activities – like doing star jumps whilst counting in French!”

The children and parents were asked to give £5 towards the day, however it was encouraged to give more if possible, to help support London’s Air Ambulance and the life-saving work it achieves attending to London’s most critically-injured patients. “Some people said why not just ask the parents to digitally transfer the money across. But instead every child is given a navy and gold purse at the beginning of Reception. These are used for every charity event and we ask the parents to help the children put the money in themselves and bring it in. That way, the children know they’ve been an active part of something special. We don’t want it to go over their head, we want them to be involved,” explained Annie.

Sure enough, many children came in with donations over £5 and proudly gave money from their own money boxes. One child, Mia Giles, decided she wanted to raise more than the £5 contribution and came up with the idea of a bake sale. Aged six, she raised £28.50 by baking and decorating cakes herself and selling them to her neighbours and family.

The fundraising day raised a total of £1,178. St Christopher’s PTA also donated 10 per cent of their funding, which was £800, and the retiring collections from the school’s Harvest Festival and two Christmas shows were dedicated to London’s Air Ambulance Charity. We are so thankful to the efforts of St Christopher’s and the children. Support from the community like this is what enables us to continue bringing rapid response pre-hospital care to the roadside when needed.

“Every year we pick a charity to support, but it’s not just about fundraising. It’s about spreading awareness and immersing the children in something important too,” said Annie. “We always pick a charity that will be meaningful for the children and were proud to support London’s Air Ambulance this time around. It was a fabulous day!”

London’s Air Ambulance’s Doctor, Dr. Matt Snowsill, said: "It is always such an honour to meet the people who raise money for London's Air Ambulance Charity. Today was a particular pleasure because we were welcomed by a whole school in spectacular fancy dress. The children had put an enormous amount of effort and imagination into dozens of fantastic designs for a new flight suit and very thoughtful letters.

“I was particularly struck by the spontaneous and insightful questions about the work we do as a service. It highlighted that children do have their own experiences of injury and the loss of loved ones. It was a privilege to listen as they chose to share them throughout the day's activities.

“I would like to extend my thanks to the school staff and the parents for a wonderful day and the incredibly generous amount of money raised. Each day I see how these contributions are used to help London’s critically-injured patients. Once again, may I thank everyone involved."

If you’re interested in organising a similar day at your school and would like some help or advice, please contact us by emailing [email protected] or calling 020 3023 3300.