40 postmen took on a 20 mile trolley dash at the weekend from their Brentwood sorting office to The Royal London Hospital, raising a total of £7,000 split between us, Essex Air Ambulance and The Sick Children’s Trust.

Brentwood posties united to raise funds for the charities in support of their colleague Jamie Benton, whose sons were involved in a major motorbike accident last month. 17-year-old Jim remains in critical condition at The Royal London Hospital, while his 16-year-old brother, Joe, is making a good recovery. While Jim undergoes treatment in the paediatric intensive care unit, his Dad is being supported with free ‘Home from Home’ accommodation at The Sick Children’s Trust’s Stevenson’s House, located just minutes from Jim’s hospital bedside.

The posties finished their walk with a picture on our helipad, where Jim was airlifted to for further treatment at The Royal London Hospital. Danny Attfield, who organised the walk, said: We wanted to help Jamie, but knew there was nothing we could really do. So we decided to get together and do something for the charities that have given so much support to the boys and the family as a whole.

“People have been so generous with donations, and we have been overwhelmed with the amount of support we’ve received. Jamie is going through an unimaginable time, but he has a good support network around him.

“Both The Sick Children’s Trust and the London’s Air Ambulance are vital charities that rely on voluntary donations. Without London’s Air Ambulance, who provided immediate treatment at the scene of the incident, today’s circumstances could be completely different. And without The Sick Children’s Trust, Jamie would be separated from his son at the most critical time of his life. So we wanted to raise awareness and funds for both wonderful causes.” 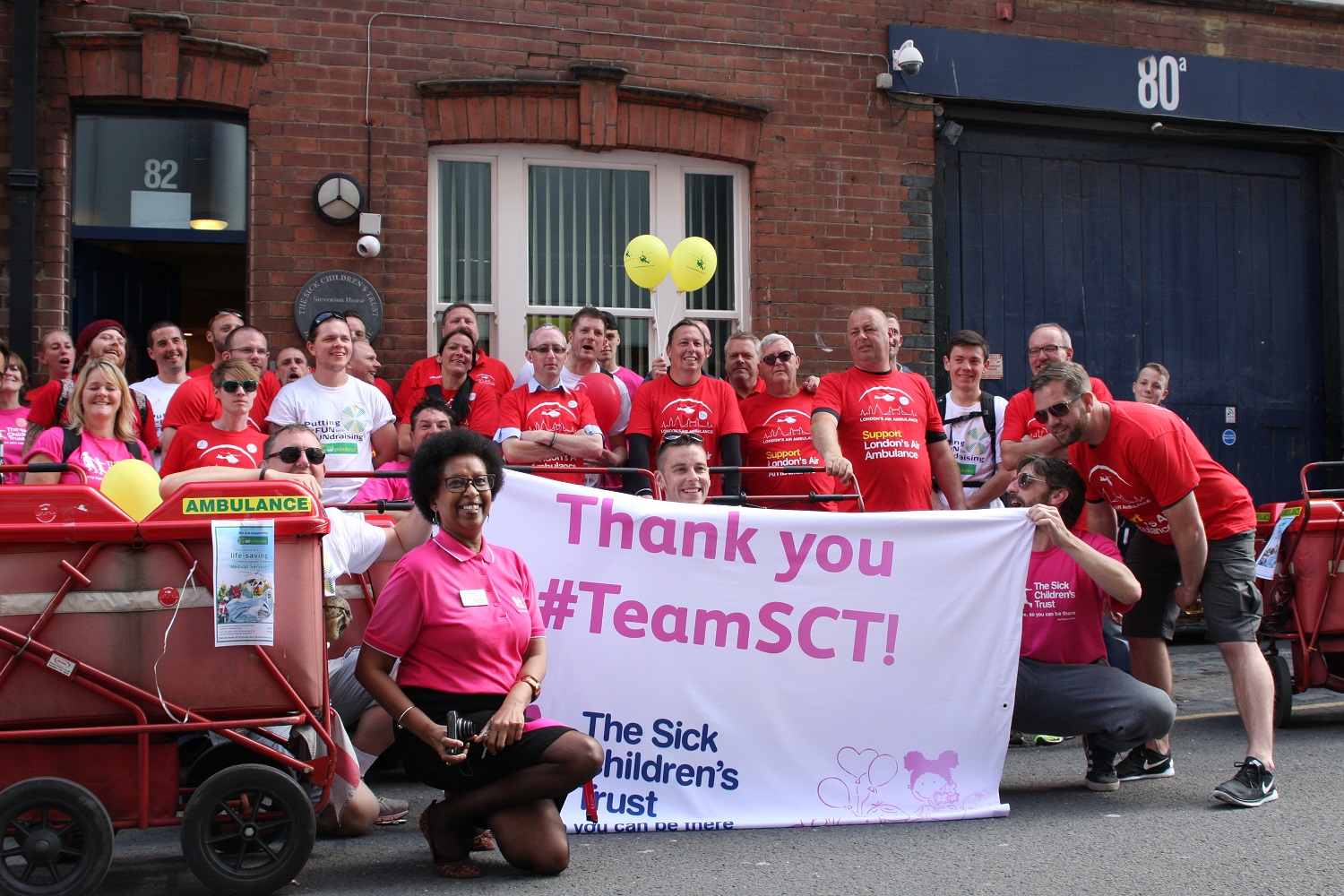 Graham Hodgkin, Chief Executive Officer at London’s Air Ambulance, said: “Congratulations and thank you to Jamie and his colleagues for taking on this wonderful challenge for us. There are lots of ways people can support us, and through the continued help of our tireless fundraisers and through the generous donations from the public, we will be able to deliver our life-saving service to more people in London.”

Jamie is currently staying at Stevenson House, The Sick Children’s Trust ‘Home from Home’ which supports families with seriously ill children at The Royal London Hospital. Because of this accommodation, Jamie can be just minutes from Jim’s bedside. He also has a direct telephone line to the ward, so if Jim’s condition changes, he can be there straight away.

House Manager for The Sick Children’s Trust, Alan Booth, said: “Jamie is going through every parent’s worst nightmare right now, and we hope to be easing at least an ounce of stress by supporting him with ‘Home from Home’ accommodation so that he can be with Jim.

“When a young person is seriously ill, it is vital that they are surrounded by their loved ones. At The Sick Children’s Trust we try and make that a possibility for thousands of families every year, but we rely entirely on voluntary donations. So we’d like to say a huge thank you to Danny and the rest of the team for raising an amazing amount which means we can continue to support more families in need.”