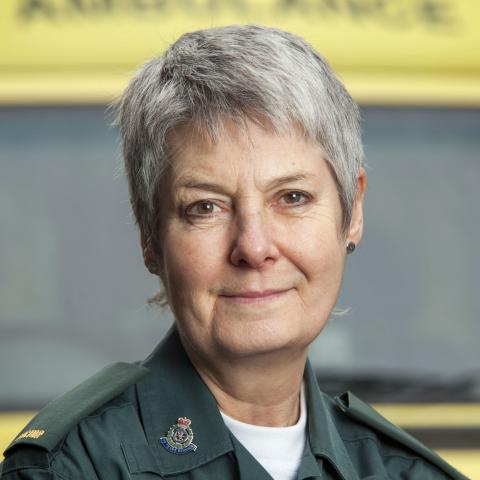 Fionna Moore’s appointment as the CEO of the London Ambulance Service was preceded by a wave of support from the frontline staff. With 25 years as a consultant in emergency medicine and having served as a Medical Director of the service since 1997, she is valued for her experience and understanding of everyday challenges faced by the paramedics. Fionna was first seconded to London’s Air Ambulance in 1994, and still continues to do regular shifts with us as an Emeritus Doctor.

We talked to Fionna about what Christmas is like for those serving on the frontline of London’s emergency services, how we can all help to make it safer, her experience as a doctor with London’s Air Ambulance and why she values the partnership between both organisations.

The Christmas period is an exceptionally busy time for the London Ambulance Service. What is traditionally regarded as a time of peace and family gatherings puts a strain on 999 services: “People continue to become ill over Christmas. We also also see a lot of elderly people who do not have the advantage of family and friends to help if they become ill and end up calling 999. Christmas in not a happy time for everyone and our staff should be recognised for their support. Every year, London’s emergency services are called to help more and more people who have become unwell through drinking too much, especially in December. Alcohol-related calls are the most common need for an ambulance among 21-30 year olds across London. That’s why this festive party season, we have partnered up with London Fire Brigade, Metropolitan Police Service, and the Mayor of London to help Londoners to enjoy themselves, but avoid needing to call an ambulance for a trip to a hospital emergency department, becoming the victim of crime, or starting fires at home as a result of drinking too much alcohol,” said Fionna. Find out more about Eat, Drink and Be Safe campaign.

As a result, there are many vacant chairs at the festive family tables of those who work tirelessly to keep London safe. Not only does the London Ambulance Service work exceptionally hard during the holiday season, many of the staff go the extra mile too: “One of our paramedics goes around hospitals handing out presents to children and we have a Station Manager who cooks Christmas breakfast for everyone each year. She likes to make sure no one at her station goes on shift or returns home hungry on Christmas day.”

“Teamwork is one of the things that London’s Air Ambulance does particularly well. Following my initial three-week secondment to London’s Air Ambulance in 1994, I underwent a brief secondment some ten years ago and I continue to do regular shifts as an Emeritus Doctor on the rapid response cars and the Physician Response Unit. The support that’s available to everyone within the London’s Air Ambulance system is incredible. Whether you are a doctor, a paramedic, a pilot or a fire fighter, you become part of a tightly knit group and you become very slick at managing trauma at the scene. The Emeritus scheme then allows staff to maintain their currency after their secondment with the charity has come to an end.”

“Pre-hospital care has progressed enormously during the course of my career, with the establishment of Major Trauma Centres across London and acceptance of the role of London’s Air Ambulance. Blood is now carried on the aircraft and we have recently seen the introduction of REBOA into the pre-hospital environment. The most important aspect of the package that London’s Air Ambulance brings to the scene of critical injury is a concentration of experience and teamwork.”