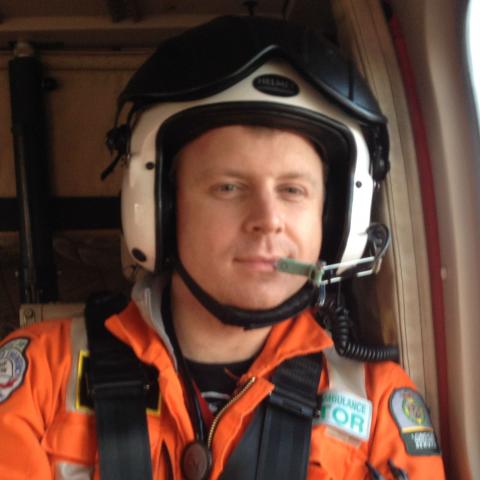 As the new season of 'Trauma Doctors' is about to start on Channel 5, Dr Tony Joy, one of the London’s Air Ambulance doctors who features in the programme, talks about his experience.

“Having the cameras with you is a real reminder that there is public interest in the work that we do,” says Tony.

One of the reasons Tony became a doctor is that he has always been fascinated by the collaborative team environment in medicine.  He discovered his interest in pre-hospital care during a humanitarian emergency response.

“Shortly after my medical student final exams I went to Sri Lanka, right after the South-East Asian tsunami occurred. This gave me a real interest in emergency care and disaster relief. It taught me how to be resourceful, the challenges of working in a slightly hostile environment, and that is where I first became interested in the idea of becoming an emergency physician.”

“The London's Air Ambulance set up is absolutely about team and collaboration: shared and joint effort to make sure that we are delivering the best care we can. Every member of the team plays an important part and the service that is delivered is greater than the sum of the individual parts.”

“It can be stressful when you are on your way to the patient, you have been given some clinical information and you know that it is a worrisome case. Your heartrate is elevated, you feel a sense of nervousness and some anxiety that you want to deliver the best care and that it is going to be a pressured environment when you arrive. We train very hard to make sure that we augment the team that is already on scene and work well with everybody else rather than coming in and taking over.  When we are on our way to a patient that training really kicks in and that is what helps us work to a high standard.  When you are on scene nerves turn into absolute focus and concentration on the patient.”

Commenting on why to watch 'Trauma Doctors', which returns for a third series on Thursday 10th March at 9pm on Channel 5, Tony says: “Programmes like Trauma Doctors, when delivered well, can really illustrate the importance of the service that we provide. They can be both scientifically informative and quite emotionally charged because they tell real stories of perhaps the worst day of somebody’s life. Both the helicopter service and the rapid response cars are busy every day, but they are not seen by Londoners on a daily basis. 'Trauma Doctors' can therefore highlight, that as a specialist service, London's Air Ambulance requires a complex infrastructure and that, as a charity, it relies on the public’s awareness and support of the service.”