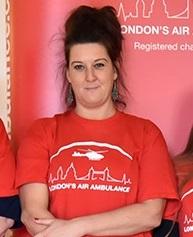 To celebrate National Volunteers week we would like to share the work of some of our individual volunteers. Victoria’s story has been written by Meera, another London's Air Ambulance Volunteer.

‘London’s Air Ambulance relies on donations from the public. By volunteering and raising both money and awareness, you could help save the life of someone in your family, someone at work, the stranger sitting next to you, or indeed help save your own life.’

Victoria has been volunteering for London’s Air Ambulance since summer 2014, after recovering from a serious infection which was treated at the Royal London Hospital. During her many stays at the Hospital, Victoria could hear the Air Ambulance taking off and landing. It was clear to her that someone had had a serious accident and needed an emergency response.

Impressed by the charity, Victoria decided to dedicate some of her time to volunteer. In March this year, Victoria volunteered at the reception desk for the Tower Powerhouses 5k Family Challenge. Here she gave teams their maps and first clue to complete the 5k treasure hunt around the City of London. She was also at the finish line cheering on the teams and congratulating them on finishing, and even ended play fighting with the children!

‘It’s brilliant to get children involved, they were all so chuffed to have finished the treasure hunt and to get certificates.  Hopefully they will be supporters for life!’

As well as the Family Challenge, she has also helped with the souvenir stall at the Run Hackney Half Marathon and regularly takes part in bucket collections at Wilkinson’s. Victoria enjoys seeing how generous people are and how willing they are to give to the charity. She has met people from many different backgrounds and knows that roles like this in the community go a long way in helping the charity.

Victoria said she would recommend volunteering for London's Air Ambulance as it is a great charity and you never know if you might need them.

‘Support London’s Air Ambulance in any way you can, whether it is giving your time or donating money, we must make sure they can continue to provide such an invaluable service for people in London and also help raise money for the second helicopter so that the critical service is available 365 days a year.’