In December 2021, our advanced trauma teams attended to 149 patients across London.

This is the first month that figures include dispatches attended to by Medic 3, a third trauma team that was launched on 1 December 2021. This additional team – working in a rapid response car, Monday to Saturday from 14:00 to 24:00 – meant that London’s Air Ambulance service had two duty teams on call during the winter rush hour.

The most common mechanism of injury during the month of December was penetrating trauma, of which our teams attended to 48. There were 37 patients from road traffic collisions and 33 from falls from height. Alongside that, our advanced trauma teams were dispatched to 25 other mechanisms of injury and six medical injuries. 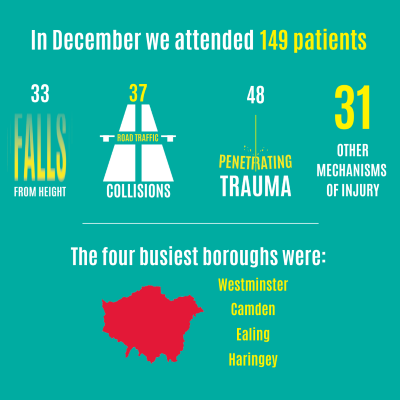 Taking the hospital to the roadside for London’s most critically-injured patients, treatments at scene in December included administering 62 ultrasounds, 14 rapid sequence intubations, nine blood transfusions, five femoral arterial lines and one use of REBOA – a technique using a balloon in the aorta to control internal haemorrhaging. London’s Air Ambulance performed the world’s first roadside balloon surgery in 2014 and is an example of how the service is always innovating to provide patients with the world’s most effective pre-hospital care.

Westminster, Camden, Ealing and Haringey had the highest number of patients attended to in this month, with 37 per cent being taken to The Royal London Hospital. Thirty per cent of December’s patients were taken to St. Mary’s Hospital, 15 per cent to Kings College Hospital and 11 per cent to St. George’s Hospital.

If you’re interested to see how these figures compare to previous months’, have a browse through November’s monthly mission report.

London’s Air Ambulance – via helicopter and rapid response cars – brings the hospital to the scene to deliver urgent, cutting-edge medical care. It is because of our amazing supporters that our teams are able to get to patients when time is of the essence. Will you help us be there for all those who need us?