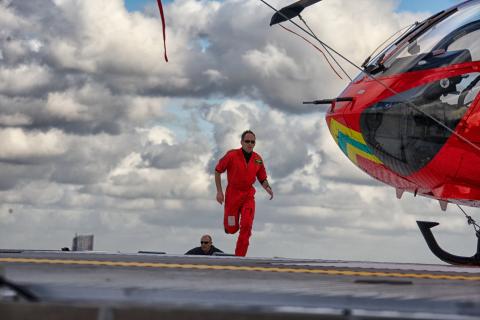 The world-leading, innovative London's Air Ambulance sets a benchmark of excellence with its dedicated pilots who negotiate London’s landmarks to access scenes of serious injury, and an advanced trauma team who take the Emergency Department to the streets.
Just another normal day at the office: a klaxon sounds and you’re expected to hasten to the helipad on top of The Royal London Hospital in Whitechapel and become airborne in a helicopter within a few minutes. You’ll be required to fly, at the same height as The Shard, through the busy skyline of the city of London. Armed with co-ordinates and critical information, and accompanied by a highly skilled medical team, you must reach any specified site within the M25 — the scene of a major trauma — where your team will provide pre-hospital medical care to a seriously injured patient. 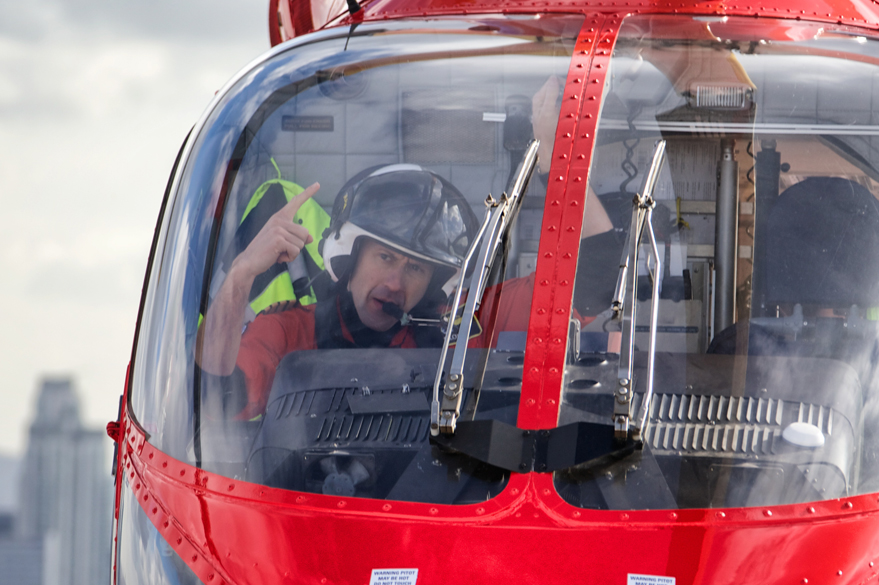 Next, you need to find an area of 80 feet in which to land the helicopter, which contains a co-pilot and an advanced trauma doctor paramedic, along with all of the medical equipment necessary to bring the Emergency Department to the roadside. You will need to land, above all, safely, considering access and proximity to the scene of injury and, of course, quickly, so that you and the team can assess the situation, manage the scene, treat a patient who has undergone major trauma and deal with the surrounding crowds and loved ones who will have just witnessed, or been part of, a horrific accident.

There may well be crowds of pedestrians, including children, in between your helicopter and the ground. You might find yourself landing anywhere from Trafalgar Square to the jam-packed area next to the London Eye, or the tourist hotspots surrounding Buckingham Palace.  Your job is very much to absorb information extremely quickly and react calmly and efficiently — even though your decisions are very much a matter of life and death. You will only have been called out in the most severe of circumstances — i.e. when someone has been hit by a train, when a cyclist has collided with a lorry or car, when there has been a serious shooting or stabbing, a fall from over two floors, a severe car crash or other incident, such as a terrorist attack. The whole process from getting the call to landing at the scene might take you less than nine minutes.

This is just a normal day for Neil Jeffers, Chief Pilot of London’s Air Ambulance, and the other dedicated members of the charity’s team, who work alongside London Ambulance Service, delivering an advanced trauma team to critically injured people in London.

Using a helicopter by day, and rapid response cars by night, a doctor and paramedic team can be at a patient’s side within minutes, providing life-saving medical interventions, such as open chest surgery, blood transfusion, and anaesthesia, at the roadside.

The charity has one helicopter and one advanced trauma team on call 24/7 to serve the whole of London. Exceptions involve major incidents, such as the 7/7 bombings, where the helicopter was used to supply extra teams to the scene.

London’s Air Ambulance was the first service in the world to perform open-heart surgery at the roadside, a procedure that increases a patient’s chances of survival from zero to 18%.

As you can imagine, being a part of this highly skilled team is a hugely demanding role, but for Neil Jeffers, one of the hardest aspects is to raise awareness of what the charity actually does. “I’d say about 95% of the time, when we arrive at the scene, people are unaware of who we are or what we do,” he explains. “We rely heavily on donations from the corporate sector and individuals to sustain and enhance the service so public awareness is crucial for us. The support of the public enables us to further innovate and push the boundaries in pre-hospital emergency medicine to save even more lives. We’re currently fundraising for a second helicopter, and aim to get the funds to cover longer flying hours.”

Neil sees the effects that the team has on saving lives in and around the city every day, and he believes that London’s Air Ambulance provides a vital service for people who live, work and visit London. Clearly one to lead by example, his spare time is also dedicated to the cause — he recently underwent a huge fundraising challenge, running eight marathons in six days — in the desert. Just another average day in the office, then…

An average cost of our mission is £2,650.
As a charity, we rely on donations to keep operational 24/7.
Thank you for helping us save lives.