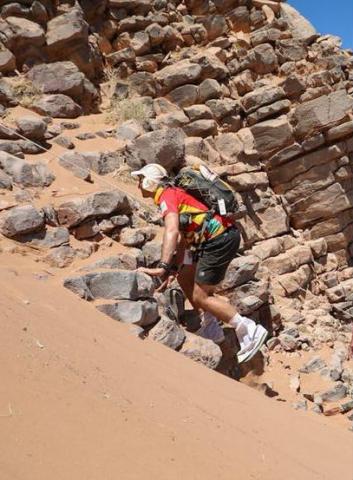 Our charity has welcomed a team who took part in the Marathon des Sables ultra-marathon back from the Sahara. The £90,000 raised is enough to treat 53 people in London.

The team completed an epic 256km, self-sustained run across the desert to raise crucial funds for our life-saving service to continue serving London. The relentless challenge has been called ‘the toughest footrace on earth’ and was described by Sir Ranulph Fiennes as the hardest thing he has ever done.

The team comprised of 14 runners who represented all sides of the charity, with doctors, paramedics, pilots, fire crew, the CEO and supporters all putting on their running shoes in order to undertake the massive challenge. One team member, Dr Chloe Baker, is a former patient of ours, having been treated in 2007 after sustaining critical injuries in a road traffic accident. She ran the race alongside Dr Tom Konig, the doctor who treated her that day, and Capt. Neil Jeffers, the pilot who flew her to hospital.

Reflecting on the race, Chloe said;

“It’s been a dream for a long time to take part in the Marathon des Sables — and normally when I mentioned that to people they told me it wasn’t a good idea — which made me all the more determined. There were incredibly hard aspects to the challenge, not least the tiredness and hunger, but London’s Air Ambulance inspired me to keep going during the race and finish — without this charity I wouldn’t be alive.”

The team completed the race in a total time of 610 hours and 13 seconds. Our fastest runner was paramedic Charlie Henderson, who finished the race in an incredible 34 hours, 4 minutes and 53 seconds, finishing 71st out of 777 men. In addition, both Chloe and Dr Claire Park finished in the top 50 out of 159 women.

There is no underestimating a challenge of this size, and the team endured severe blisters, dehydration and even a late-night sandstorm. This year’s ‘long stage’ stood at 86.2km long, leaving entrants running day and night for up to 35 hours. Unfortunately, this stage saw Marie LeBrec, the sister of one of our former patients, forced to withdraw after completing over 120km of the race.

“Even though she did not complete the race, Marie has accomplished something that most people would think was impossible. Not only that, she’s done it while raising money to help our service treat those who need us most. I think I speak for everyone when I say just how lucky we are to have had her running with us.”

On arrival back in London, the team found out that they raised a massive £90,000 for our service. With each mission costing £1700, this means that they have raised enough for us to be there for 53 patients in need of urgent trauma care in the capital.

Responding to the news Jonathan said;

“This is an absolutely incredible amount. We all knew how much goodwill there is towards us in London, but this goes above and beyond anything that we expected. This was the toughest challenge I have ever undertaken, but our suffering is nothing compared to what our patients go through. It was the knowledge that we were doing it for them that kept us going.”