In the season finale of his rugby team’s promotion battle, George was prepared to give it his all to secure the win. However instead of waking up post celebrations, he woke up post surgery.

Towards the end of the first half at Wimbledon Rugby Club, on 2 April 2016, George – aged 32 – collided with a player.

“At the point of impact there was a sickening crunch,” described Gavin, George’s father. Gavin had been watching from the sidelines with George’s wife, Soraya, who was six months pregnant with their first child. “As the other player sat up, George remained still, lying on his back.”

Following a knee to the side of the face, George had severely fractured his skull.

“The surgeon explained it to be like what happens to a concrete slab when you hit it with a hammer,” said George. “My skull had been smashed into lots of little pieces.”

Gavin described: “There was a huge dent on the right side of George’s forehead, which even a non-medical person could see was a fractured skull.”

Able to get to closer to the scene due to road closures, London’s Air Ambulance’s advanced trauma team was dispatched by air and arrived ready to provide George with rapid response care.

“The team were simply extraordinary,” said Gavin. “They took control and assessed the risk amazingly.”

The team knew it was of paramount importance to place George in an induced coma to protect his injured brain. 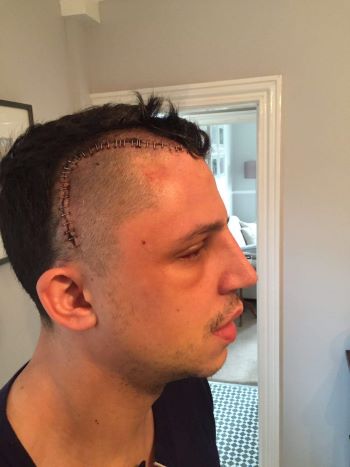 “The surgeon explained to me that this stopped my brain from swelling into the broken fragments of skull,” said George. “It would have been a very different outcome if that had happened.

“I don’t remember the accident at all, and I don’t remember going into hospital. I can’t even tell you if it hurt. When I first woke up I thought maybe we’d won and I’d had a big night out and was suffering. But when I saw my mum at the bedside, it dawned on me I wasn’t in my bedroom. I knew then that something serious had happened.”

George had a compression fracture in his skull and a minor fracture in his brow bone. The surgeons at St George’s Hospital performed an emergency operation that was necessary if George was to survive. They rebuilt his skull from the bone pieces that remained, fixing them together with nine large screws. George remained in the Intensive Care Unit for three days, before moving to a neuro-specific ward for a day.

Now fully recovered, and a family of five, George and Soraya are living in Bermuda. 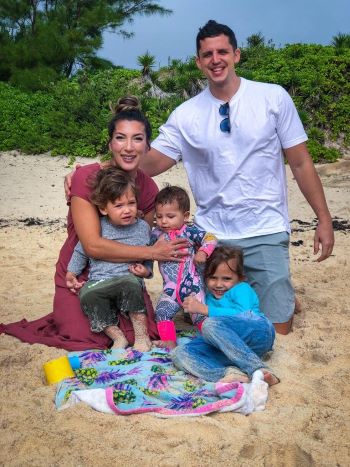 “I never realised an accident like mine would warrant the air ambulance. I’m really moved by that,” said George.

Earlier this year, Gavin rode in RideLondon for London’s Air Ambulance Charity. “The helicopter crew had the kit, the experience, the control and the wisdom that certainly reduced the time George spent in hospital. But I never got to say thank you and have no idea of their names; hence why I joined the event to give my support,” explained Gavin. “My wife Jill set up a regular gift for London’s Air Ambulance very shortly after George’s accident, and we’re proud to maintain that today.”

Gavin fundraised for London’s Air Ambulance Charity through the 100-mile bike ride. We’re so grateful to his efforts, and so pleased George has made a full recovery.

“Dad did a great job, for a great cause,” said George. “One that is super close to my heart.”

If you’re interested in completing a challenge event for us, browse the upcoming events for more information.