On 19 January 2008, Vaiva and her (now ex) partner set off early morning to purchase their dream car. However, they never made it to the dealership, and the journey Vaiva began was one no one anticipated.

“It was a very exciting morning,” Vaiva recollected. “But it was so early, so in the back of our friend’s car, I fell asleep. Next, I woke up in hospital.”

Vaiva has no memory of the car accident that changed her life forever. The driver had lost control of the car on the A2 at the Danson Interchange near Bexley and crashed with such an impact that the car was turned over and Vaiva thrown out of the rear window onto the carriageway. The nature of that mechanism of injury meant Vaiva’s injuries were expected to be very serious and London’s Air Ambulance team were dispatched immediately. The team was at her side within minutes, where it was apparent that Vaiva’s injuries – including suspected damage to the head, spine, and face – were life threatening. The doctor and paramedic team, with the assistance of the London Ambulance Service, elected to place Vaiva in an induced coma to best optimise her physiology. She was then flown to the Royal London Hospital which was London’s only Major Trauma Centre at the time. 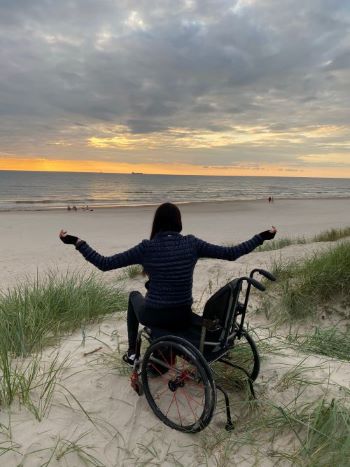 “When I opened my eyes, all I could see was a big light. I was on lots of drugs and I am thankful that the medical teams made it so I was never in physical pain.

“Only after weeks in hospital did the doctor begin to explain what had happened to me. I was incredibly drowsy, so when he mentioned a wheelchair, I just said okay.”

Vaiva had undergone five surgeries to reinforce some of her vertebrae with metal and fragments of hip bone, reset her fractured jaw and remove blood from her brain. The doctor then informed her of her spinal cord injury.

“I first thought the wheelchair was just temporary. I was thinking I can heal and I will stand up. But I wasn’t aware of how bad the spinal cord injury was. The doctor then told me that it was 50/50 if I would ever walk again.”

The emotional toll on Vaiva was as intense as the physical. “I felt like I was always wearing a mask – I was always pretending that things were going to return to normal, like I was temporarily playing a role in a movie. 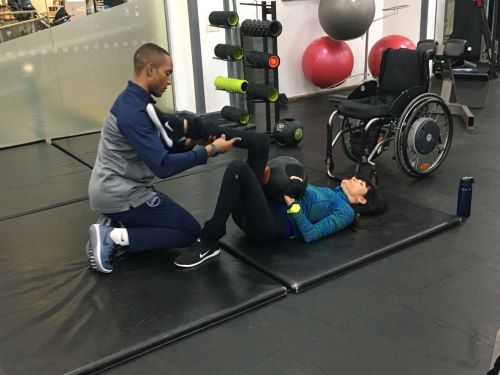 “Then you realise you have to adapt. I told myself that I can’t just give up. I have to invest in myself – my new self – now. You have to work out how to look forward because you’re lucky to have a future.”

Vaiva had to relearn how to do many daily tasks, such as dress, eat, hold a spoon and drive a car. But now she is independent and running her own beauty business, with aspirations to start another company. She trains with a personal trainer twice a week and she is making the most of life. "I really feel strong and courageous. I don't care whether I walk with high heels or use a wheelchair: I live a full life. In the last 14 years I have visited so many countries – I am experiencing life and I never think anything is boring anymore!”

The journey of recovery was difficult, but with the support of her sister, close family members and her own positive attitude, Vaiva is once again “living and happy”. Now, she wants to help others.

“It is my dream to create a charity trust for people with spinal cord injuries. Doctors don’t tell you how you have to adapt mentally, how hard it might be and what things will need to change. People need support from people who have gone through it themselves. That’s what I want to do.” Vaiva has already started work on this dream by creating a video which you can view below.

Her main message to anyone struggling is “you always need to invest in yourself. Who knows what is in the future. A door may have closed but a window can open. I didn’t get my dream car, but I did get a wheelchair!

“I am aware that I only have a future partly because of London’s Air Ambulance. I am so thankful for what they did for me. I will always want to help them in return.”