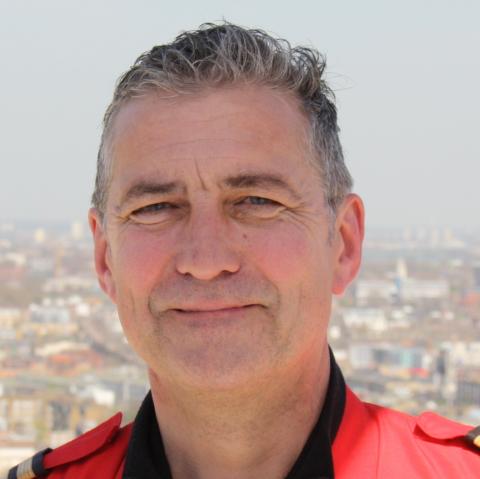 With over 35 years of experience flying helicopters and 6,000 emergency medical missions under his belt, our pilot George Phillips has a wealth of experience. Not only did he serve in the Army during the Cold War, but he has also saved millions of endangered species in South Georgia. We catch-up atop The Royal London Hospital — where our helipad is based — to learn more about the unexpected journey George took to be sat where he is today.

Graduating with a degree in Biology in 1975, you would assume George would have been more comfortable wearing a laboratory coat than a flight suit. “My head told me to be a microbiologist,” he said, “but my heart since the age of ten wanted to be a helicopter pilot. After university I joined the Army where I learnt to fly helicopters and since that moment, I have never looked back.”

After five years flying in the Army, George spent another 17 years with the RAF Search and Rescue and Police Service. George vividly recounts a number of helicopter missions that directly helped save lives. “It was this that made me want to be an air ambulance pilot. After a lot of time spent constantly moving around and working overseas I joined Lincolnshire and Nottinghamshire Air Ambulance” — a position that he held for 11 years before joining London’s Air Ambulance.

George believes he has truly found his calling in the air ambulance sector: “When I was a search and rescue pilot my job was pilot and pilot only. Now I get to help in other ways too, often being an extra pair of hands on scene and providing support to the medical teams during time-critical situations. You get to meet new people and be a flag bearer for the charity too.”

Contracted specifically to cover the extended flying hours, George joined London’s Air Ambulance in March this year. Up until this time, the aircraft had to stop flying at 6.45pm. “It’s a brilliant experience to be able to work with London’s Air Ambulance during this period. This is the first year in the charity’s history that it has flown longer hours during the summer months and to play a small part in this is an honour.”

George sees, on a daily basis, London’s most critically ill. Without the service that the charity provides he knows that there would be less hope for those in need: “Everyone is so appreciative of what London’s Air Ambulance does every day, but still not everyone realises that it’s a charity. To be truthful, it wasn’t until I worked in the air ambulance sector that I came to realise just how important donations from the general public are in order to keep organisations like London’s Air Ambulance flying. It’s not just the medical teams helping to save lives, it’s also the wonderful charity fundraisers and volunteers that are doing this too.”

That ten year old child who always wanted to be a helicopter pilot surfaces in George's passionate description of his rescue work: “Flying low level through the London landscape is exciting, it’s like being Aladdin on a magic carpet, delivering a magical team to those that need our help.” At this point, the klaxon sounds meaning someone in London is in need of just that.