EY is a global company specialising in assurance, consulting, strategy and tax services. Our Chair of the Board of Trustees, Bob Forsyth – who is a partner at EY – nominated London’s Air Ambulance Charity to be EY’s charity partner in 2021. As a result, EY are raising money for the charity throughout the year, of which this abseil fundraising will contribute to.

Bob said: “This shows how strong the charity team can be: making things happen when we focus lots of effort on a small point for a short time.” 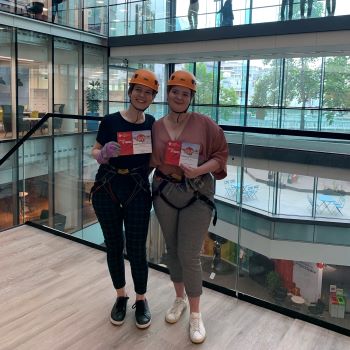 Sam and her colleague Denise took on the abseil bravely and have raised over £2,000 together.

Tana Daniels, a Senior Manager at EY, helped organise the abseil – and of course took part.

“It was fun, but stressful!” she laughed. “It was nerve racking falling of the edge, but good fun. It’s a lovely way to get everyone back together in the office too.

“Everyone was invested in raising money for London’s Air Ambulance Charity.”

We’re so grateful to EY for their bravery and amazing fundraising.

If you’re interested in abseiling, have a look at our own abseiling event and sign up to dangle off the edge of Europe’s highest helipad!