In the first month of 2022, our advanced trauma teams attended to 149 patients across London.

The most common mechanism of injury was penetrating trauma, of which the trauma team attended 44 within the month. They were also dispatched to 36 road traffic collisions, 27 falls from height, 22 other types of injury and 20 medical injuries.

In terms of incident locations, Westminster, Lambeth, Redbridge and Tower Hamlets had the highest number of patients attended to in this month. 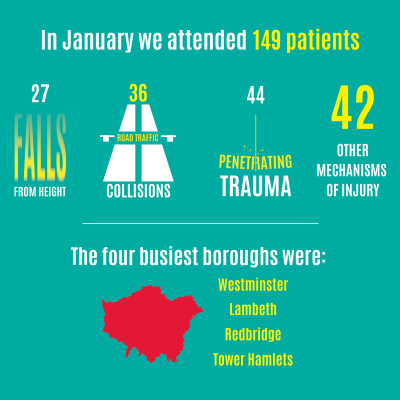 If you’re interested to see how these figures compare to previous months’, have a read through December 2021’s monthly mission report.

London’s Air Ambulance – via helicopter and rapid response cars – brings the hospital to the scene to deliver urgent, cutting-edge medical care. It is because of our amazing supporters that our teams are able to get to patients when time is of the essence. Will you help us be there for all those who need us?