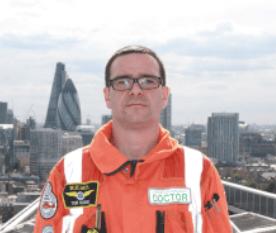 Dr Tom Hurst has been appointed as the new Medical Director of London's Air Ambulance.

Tom brings a wealth of expertise to the role. He is a currently a consultant in pre-hospital care with London’s Air Ambulance and a consultant in intensive care medicine and major trauma at King’s College Hospital. He trained in Manchester before undertaking a secondment to London’s Air Ambulance in 2008. Tom was Clinical Lead at East Anglian Air Ambulance from 2011 to 2014 and the sub-specialty lead for training in pre-hospital emergency medicine in London from 2014 to 2019.

Tom’s appointment follows the departure from the medical director role of Dr Gareth Davies, who stepped down this year following the end of his tenure as Trustee to the Board of Directors. Gareth held the role from 1996 – 2019 and remains a consultant in pre-hospital care with the service.

The Medical Director role is of vital importance to London’s Air Ambulance Charity and Barts Health NHS Trust, providing leadership in the delivery of quality clinical care in collaboration with the London Ambulance Service and ensuring the efficient running of this life-saving service.

“This is truly an exciting time for London’s Air Ambulance and I am proud to be a part of it. We have exciting new procedures coming down the track that have the potential to be transformative for our patients.

“I look forward to building on the incredible work that Dr Gareth Davies has undertaken as Medical Director. Gareth has steered London’s Air Ambulance to be a global leader in pre-hospital care and we can see this in the way the charity is now considered a vital part of London’s emergency response.

“Above all I look forward to driving forward the clinical developments that will help us create the next generation of survivors in the capital.”

“The charity is delighted to welcome Dr Tom Hurst to this important role as we enter the next phase of development. Tom has an unwavering commitment to our vision for rapid response and cutting-edge care to end preventable deaths in London from serious injury.

“I would also like to pay tribute to Dr Gareth Davies. Gareth has been instrumental to our charity’s development and has played no small part in ensuring we are recognised as a world-leading institution.”

“This new post – joint between the Trust and the Charity is an exciting new model. Tom’s predecessor – Dr Gareth Davies -  has left London’s Air Ambulance in an excellent position with a series of new processes coming on line to help critically injured patients.

“Barts Health looks forward to continuing the partnership with the charity and the London Ambulance Service to push the boundaries of trauma survival and Tom is the ideal person to lead this programme.”

London’s Air Ambulance Charity delivers rapid response and cutting-edge medical care to save lives in the city.  The charity marks its 30th anniversary this year with the campaign 30 Years Saving Lives, of which HRH The Duke of Cambridge is Patron.