The Secretary of State for Health, Rt Hon Jeremy Hunt MP, has this morning visited us and the Emergency Department at The Royal London Hospital in Whitechapel. Here he saw first-hand how the combined team from the charity, Barts Health NHS Trust and the London Ambulance Service deliver the world’s most advanced trauma care to London’s most critically ill trauma patients.

We treat on average five critically injured people in London each day, performing medical interventions at the roadside which are normally only found in a hospital emergency department. Barts Health NHS Trust provide the doctors and some financial support and the London Ambulance Service provides the paramedics and expertise to dispatch the service. As a charity we rely heavily on voluntary donations, and have a world class reputation for our aviation operation and for delivering clinical innovation and excellence at the roadside. 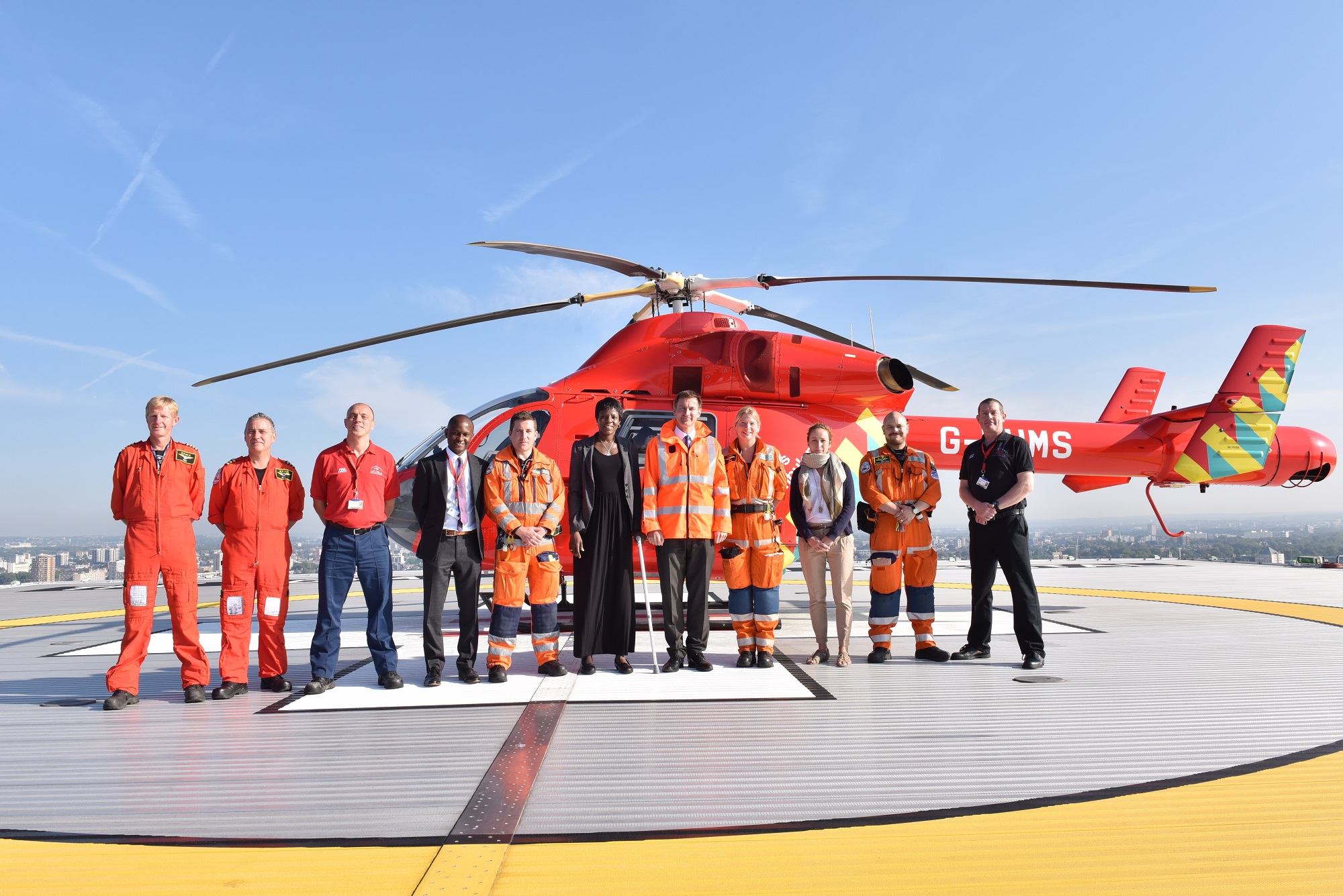 The Royal London Hospital is a leading Major Trauma Centre with an international reputation for expert care. One of four such centres in the city, many of our patients are taken to the hospital for further NHS treatment where a team of dedicated consultants from a range of specialities will immediately meet them and provide life-saving care and surgery, continuing to give ongoing therapy and support to help patients return to their normal lives as quickly as possible.

Mr Hunt said: "I was delighted to visit London's Air Ambulance headquarters and The Royal London Hospital, both of which provide vital support to critically ill trauma patients across London.

"It was a privilege to meet staff and former patients to talk about their experiences, and to see how the London's Air Ambulance team handle the toughest calls — from initial incident response to the handover with the Barts Health Emergency Department for further treatment. Working in collaboration with London Ambulance Service, they provide a fast and efficient emergency response across the capital. 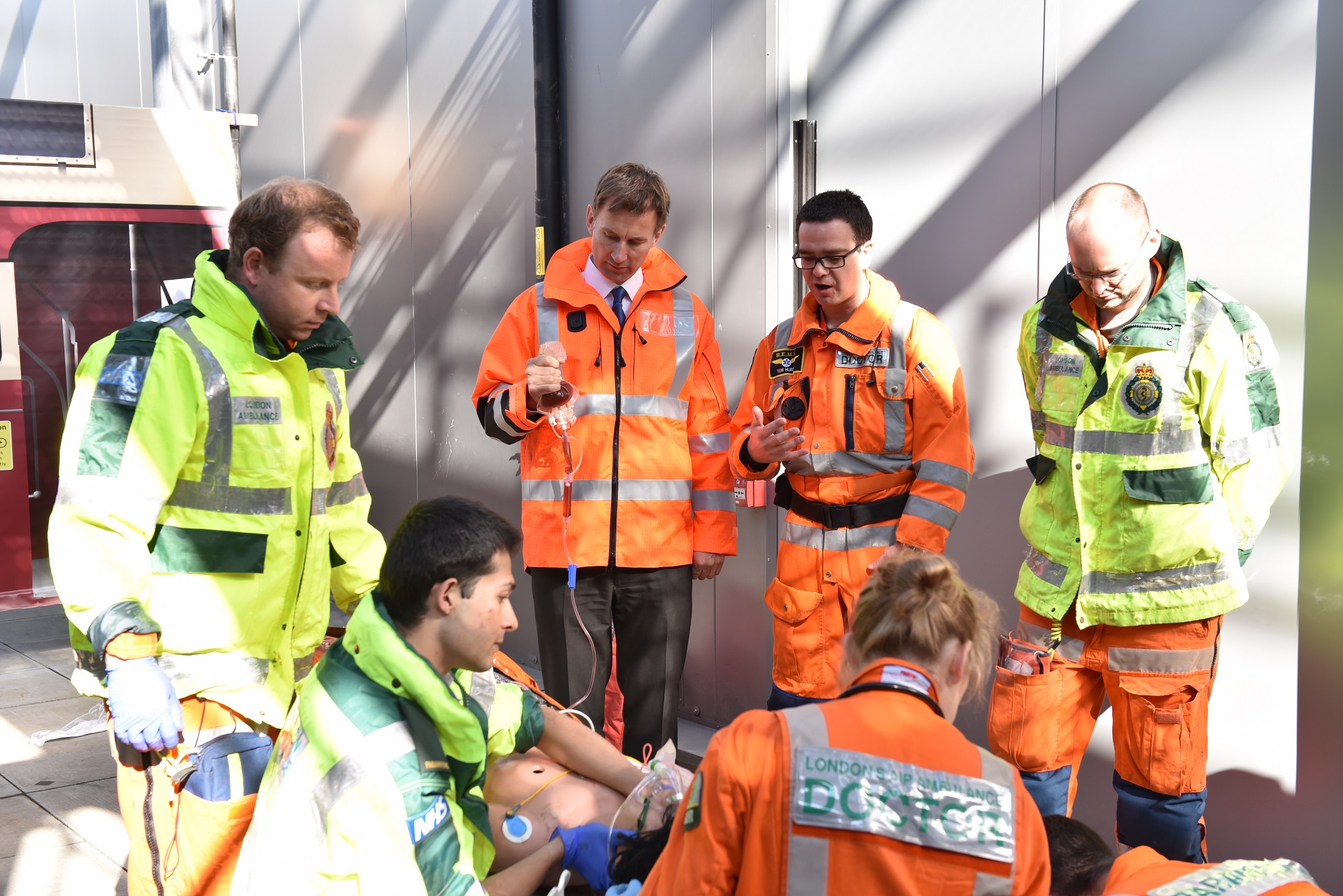 The Secretary of State met with the teams that work tirelessly and collaboratively to help save lives. This included our doctors, paramedics and, pilots who work to deliver pre-hospital medicine at the roadside anywhere within the M25. He also met with Barts Health NHS Trust doctors and nurses who ensure the ongoing care and treatment of the patients that get passed onto The Royal London Hospital and newly appointed London Ambulance Service Chief Executive, Dr Fionna Moore.

A simulation depicting a medical emergency scenario showcased the major trauma pathway of care for a critically ill person in London. Mr Hunt also met with Aderonke Joseph, who was hit by a car while at a pedestrian crossing in January 2015, and Dr Chloe Baker, who was run over by a lorry while cycling in 2007. Both patients were treated by us, London Ambulance Service and The Royal London Hospital.

Graham Hodgkin, Chief Executive Officer at London’s Air Ambulance said: “London's Air Ambulance is in direct partnership with Barts Health NHS Trust and London Ambulance Service, which enables us to deliver innovative pre-hospital care on scene. The service has a track record in clinical innovation and has a series of world firsts in pre-hospital care. Together with our partners we continue to pioneer more procedures to enable us, and others, to save more lives both here in London and globally.” 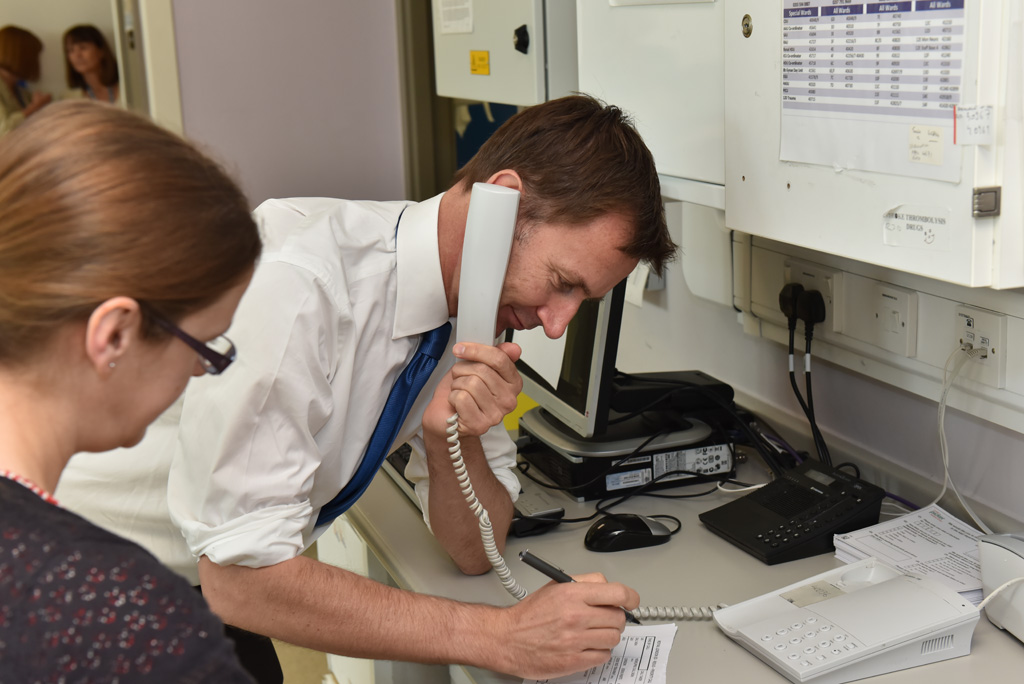 Alwen Williams, Interim Chief Executive at Barts Health NHS Trust, which runs The Royal London Hospital, added: “It was a pleasure to welcome Jeremy Hunt to The Royal London Hospital today to observe the fantastic partnership working between specialist teams at the charity and hospital, evidencing how our highly-innovative, expert care is providing a truly world-leading trauma service for Londoners.”

London Ambulance Service Chief Executive Dr Fionna Moore is also an Honorary Consultant  of ours in Pre Hospital care, and does a shift every six to eight weeks. Fionna said: “It’s vitally important that we work closely with our colleagues at London’s Air Ambulance. Our paramedics, who are seconded to work there as part of the team, learn a great deal from working alongside the doctors treating seriously ill and injured patients and are able to use this knowledge and experience to help other patients. They are also able to liaise closely with other ambulance staff at the scenes of traumatic incidents, which is extremely valuable.”