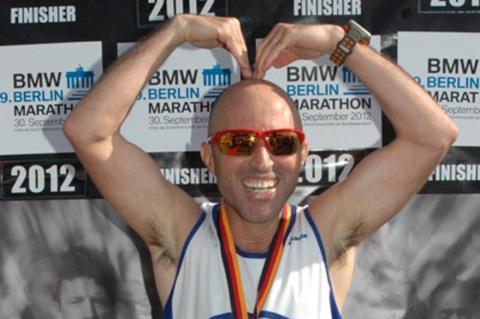 Only eight months after being hit by a bus, 40-year-old personal trainer Rachid Afouzar ran his first marathon for our charity in Berlin. He is already preparing to repeat this success in Marrakesh on 27th January and will conclude the fundraising triplet in London on 21st April 2013. The marathon trio adds up to 78 miles — almost twice the diameter of M25 - that Rachid will accomplish a little over a year after his accident.

It was hard to imagine in February 2012, when the London’s Air Ambulance team treated Rachid when he had fractures to his skull, collar bones shoulder blades and ribs, as well as bruised lungs and a lacerated liver.

Rachid started running again an incredible three months after his accident. He has had fantastic support from friends and members at his local running club, Ealing Eagles. Their support helped him get back to pounding the streets again (including holding his hand to cross the road).  The support from Ealing Eagles is ongoing and he’s held lots of hands over the months.

He took part in the BUPA 10K in May and the British 10K in July. Prior to September’s Berlin Marathon, his longest run since the accident was the Hermes half marathon at the end of August.

Despite the challenge that the BMW Berlin Marathon, 39th Edition 2012 represented, Rachid finished the 26-mile route between Brandenburg Gate and “Kleiner Stern” in an incredible time of 3:05:49.

“According to my time on the Berlin website, up until the 35th km I was on target for sub-3 hours, but I didn't plan for this at all. I recalled a saying from my friend: ‘'at this distance a man with a hammer hits you on the head’. He was right. At the 35th km, the man with the hammer was also driving a bus, the bus hit me and then he got off the bus to finish me off with the hammer,” said Rachid.

“But I decided not to stop, walk or give up. The bus broke my bones, my ribs, and I had head fractures but it will never break my spirit. I felt pain in every part of my body, especially the places that I hurt during my accident - especially my lower back where I had an operation.

“It was like a knife going through me. I cried whilst running, slowed down but never stopped. Funnily enough the worst pain was blisters in my right foot.”

So he’s on track for his second marathon on the 27th January and the Ealing Eagles runners are, as usual, there with support. To date there are about 19 Eagles running the Marrakech Marathon (or Half Marathon) and, if needed, with hand holding at the ready.

Commenting on his fundraising for London’s Air Ambulance, Rachid says:“The helicopter medics are my angels. Words cannot say how grateful I am. When you have an injury or accident, minutes can be the difference between life and death. I discovered that London’s Air Ambulance gets much of its funding from charity. Very early on in my recovery I wanted to run and raise funds for them.”