On 5 April 2022, members of Barts and The London Boat Club (BLBC) once again rowed for an entire 24 hours to raise money for London’s Air Ambulance Charity.

An annual event that first started fundraising for London’s Air Ambulance in 2013, the rowathon witnesses boat club members take turns on two rowing machines continuously, from midnight on one day through to midnight on the following day.

“Everyone loves taking part,” said Sam Murphy, BLBC Secretary. “Some people do two hours, some people do 30 minutes. There’s a varying degree in experience and fitness, but everyone in the club takes part, regardless of if they’re a freshman medical student or been here for five years.”

BLBC is the rowing team for Barts and The London School of Medicine and Dentistry, which is part of Queen Mary University of London. London’s Air Ambulance Charity is already aligned with Barts, as Barts Health NHS Trust employs the majority of doctors who join London's Air Ambulance for six-month secondments, and the consultants who are permanently associated with the service. Bart’s Health also provide direct financial support and our helipad facilities at The Royal London Hospital. 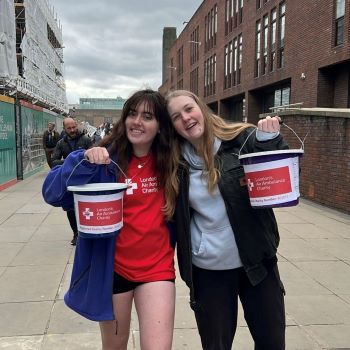 “It’s an integral part of Barts; raising money and integrating our sport and our charity,” said Sam. “It’s a lovely way to further collaborate the institutions and support our hospital.”

This year, over 30 individuals took part in the rowing and collection, situated near Millennium Bridge.

“We have two machines going: for 70 per cent of the time both are in use. When people change over, someone continues pulling the chain while the rower gets their feet in.” 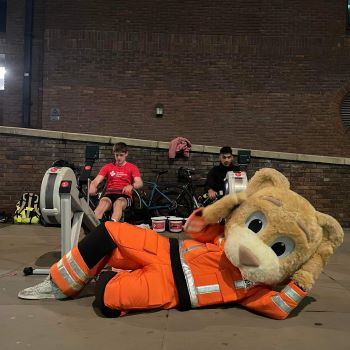 The gallant efforts of the rowers raised £2,190 for London’s Air Ambulance Charity. This contribution will help our advanced trauma team continue reaching London’s most critically injured patients, when every second counts.

“Because it’s for London’s Air Ambulance Charity, people are so up for it. I didn’t have to persuade anyone,” Sam told us. “Every rowing slot was filled within three days, and donations aren’t hard to collect as you can feel that the general public really respect the work of London’s Air Ambulance.

“When fundraising for London’s Air Ambulance Charity we hear a lot of touching stories from people walking past who realise that anyone could need them at any time. You never know when something like that could happen to you, or people you know.”

We’re so thankful to BLBC for their fundraising – and rowing! – efforts. If you’re interested in organising a fundraising event of your own, please don’t hesitate to reach out to us at [email protected].

Sam concluded: “It is a charity that a lot of London respect and value, which makes it nice for us as we fundraise; the people going past us understand.”