When the UK’s second lockdown was announced on 31st October, 11-year-old Jack Frazer-Hogg decided to combine keeping fit with challenging himself to raise funds for London’s Air Ambulance Charity after his football team’s matches were postponed again.

Jack chose to run a marathon (42km) around his local park during November, and adopted a football theme by wearing the shirts of different football clubs as he ran, including his favourite team, Manchester United.

Jack had a very personal reason for supporting us, explaining:

“I wanted to raise money for London’s Air Ambulance because they are close to my family's heart as they attended my cousin after an accident in 2018 and were with him when he died. They have also helped friends of my family survive accidents and they do an amazing job.” 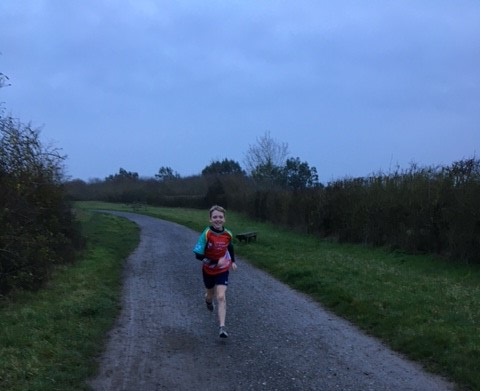 Despite having to run before and after school, and hurting his shoulder in a tumble on his very first run, Jack completed his three week marathon on 1st December, smashing his original £600 target to raise £965 in total.

Jack even managed to get creative during his marathon, raising awareness of his fundraising by running 5km around Dorney Lake with a human-sized Aldi ‘Kevin the Carrot’ dressed in one of our branded tops, though he admitted that Mum Kim had to help him carry it as it was bigger than him!

Jack was full of praise for everyone who donated:

“I really enjoyed doing the marathon and cannot believe all the donations that came in. Thank you to everyone who supported me”

And the worst part of the marathon for Jack? “I had to run in a Chelsea shirt for my Nan and friend Angela, even though I am a Manchester United supporter!”

We would like to say a massive thank you to Jack and Kim for all their hard work, and to everyone who gave so generously to help keep London’s Air Ambulance flying.

When London calls, we respond fast. But to keep flying and saving lives, we have to keep fundraising.  If you have a fundraising idea that you would like to discuss please get in touch by emailing [email protected] / 020 3023 3300