Forty eight members of The Barts and the London Medical School Boat Club participated in a yearly event on 12th April, rowing non stop for a day to raise money for London's Air Ambulance. Students were taking turns on a rowing machine at North side of the Millennium Footbridge.

“As medical students we all highly value the importance of pre-hospital care and what better way to show it than raise money to support London's Air Ambulance that sits on top of our very own hospital", said Emile Oliver from The Barts and the London Medical School Boat Club.

“In total, we raised £1970.26! All for a fantastic cause and a testament to both the hard work of the club members and the generous members of the public who donated. A special thanks to Diego Vergara Jack Tooze and Alex Davie for organising the event,” said another participant Tom Diffey.

“Due to a change in rules, we were only permitted to do the ergothon for 24 hours this year. It was also required to be between 12am-12am and had to start on Thursday night. This was not ideal for catching the tourists and inebriated, er I mean generous people who are on their way home at 3am in the morning on Friday and Saturday night but it was the best we could do,” says Tom

“Forecast for rain, we began at 12am. The next 5 hours proved cold, wet and lonely and the majority of our chalk drawings (BLBC crests, London's Air Ambulance helicopter, hopscotch...) were washed away. Nevertheless, we stuck at it, finding shelter occasionally in an attempt to dry off.”

“At 5:30-6am, it started to liven up a bit with a few joggers and early birds being spotted on the horizon. From then on, we powered through and got out in the dreary rain to encourage the public to donate, and many generous people did. A club-wide effort meant that there was always a good sized group of us there to motivate the rower and shake the buckets.” 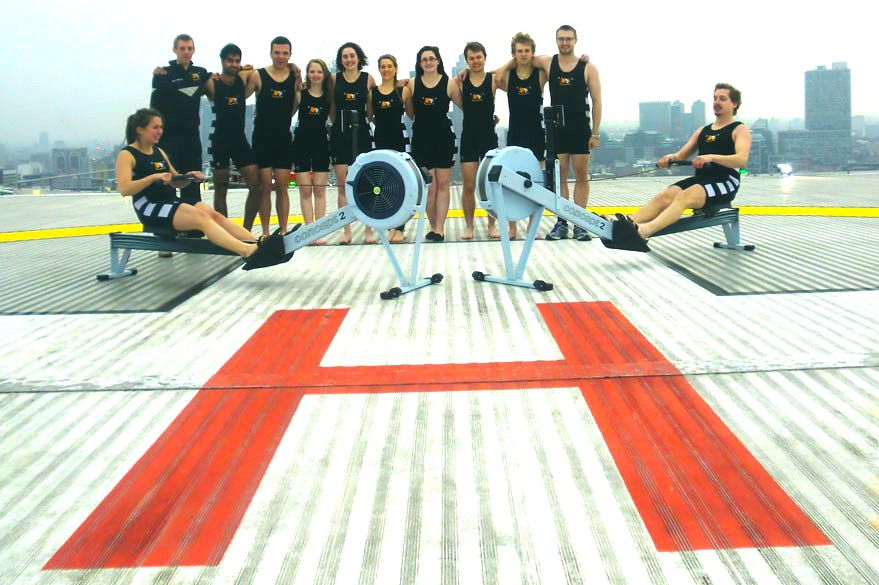