On a scooter trip to get ice cream on 18 April 2018, 11 year old Bruno was hit by a vehicle and severely knocked to the floor.

“It was a regular day. He told me, ‘I am going to the corner shop to buy ice cream’,” described Fernanda, Bruno’s mother. “When I next looked at the clock, I realised Bruno was taking a long time to come back home.

“I had a feeling, a mother’s feeling. So I started running.”

Fernanda found Bruno on the roadside, where a passer-by told her “the helicopter’s coming to look after your son”. London’s Air Ambulance arrived on scene, and found Bruno essentially in a coma; unconscious with a severe traumatic brain injury. 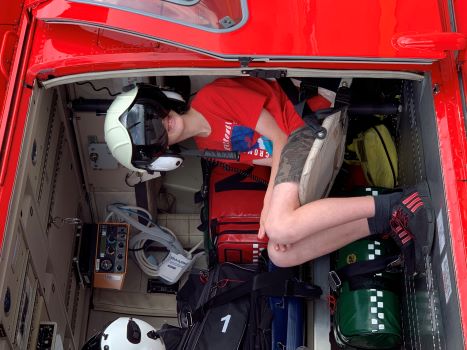 London’s Air Ambulance’s Medical Director, Dr Tom Hurst, said: “He was in the group of patients who we worry a great deal about, because it’s clear they have a bad head injury. To put it simply, it could go either way.”

Providing urgent treatment at the scene to optimize Bruno’s chances of a good recovery, London’s Air Ambulance’s advanced trauma team administered Bruno an emergency anaesthetic, took control of his breathing and placed a tube in his windpipe to protect his airway.

Bruno spent almost three months in hospital and another two in rehabilitation. “His relentless commitment to life is a long journey, and that journey has not ended” said Daniel, Bruno’s father. “London’s Air Ambulance Charity make such a difference, and we can make a difference if we can support them.”

Fernanda concluded: “Every single day, I am grateful.”

In this video below, Bruno and his family tell their story: