On 15 April 2017, Jay was on his way home after a night out with friends in Canary Wharf, when he had a catastrophic accident. He lost his footing and fell head first down a flight of concrete stairs at the train station. Jay doesn’t remember anything after his fall, but was fortunate to be with a friend who put him in the recovery position and called an ambulance. Due to the severity of his injury, London’s Air Ambulance was sent to treat him at the scene and stabilize him before taking him to The Royal London Hospital.

Jay suffered multiple closed depressed fractures to the skull, bleeds on the brain and was in a coma for 10 days. When he finally woke up, his mum, dad, girlfriend and sister (who had flown back from Australia) were all sitting by his side wearing London’s Air Ambulance t-shirts telling him what happened. He was told by his doctor if it wasn't for London’s Air Ambulance, he probably wouldn't be here. Jay had an eight hour operation to reconstruct his skull with metal plating, as well as multiple other operations and left hospital two weeks later to spend the next few months at home recovering.

Whilst in hospital, Jay said he 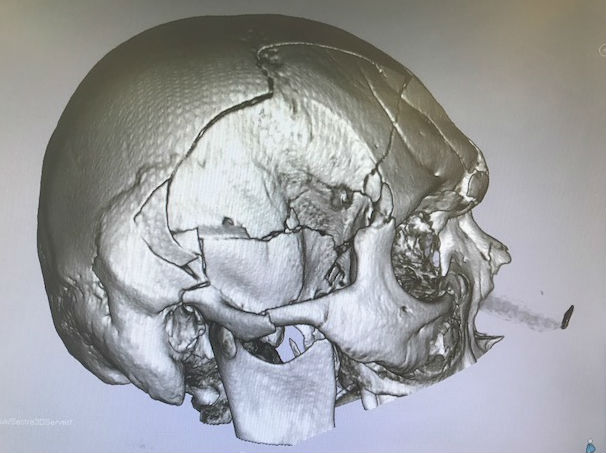 wanted to run the London Marathon for London’s Air Ambulance Charity. Just one year later, on 22 April 2018, Jay amazingly completed the grueling 26.2 mile run. On the same day the previous year he was still in a coma. He was aiming to raise £10,000 for London’s Air Ambulance Charity and ended up raising a staggering £21,595. His parents, sister and girlfriend were all there cheering him on through their tears of pride.

Amazingly, Jay already knew that London’s Air Ambulance was a charity, as his girlfriend had also been treated after having a serious car accident 10 years ago. He had been supporting the charity every month with a ‘Give As You Earn’ scheme through his work. 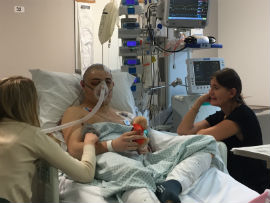 Jay came to the helipad at The Royal London Hospital to meet the team and one of the advanced trauma doctors, Dr Michael Kim, who treated him. It was an emotional reunion for them both.

“It’s not often you get the chance to thank the person who saved your life”, said Jay. The meeting also meant a lot to Dr Kim. “It means so much to us to meet our patients after they are back on their feet. Jay was in a really bad way when I last saw him and to see him doing so well and raising so much for our life-saving charity is incredible”.

We can only be there for patients like Jay because of support like yours; thank you. If you don't already, please donate to support our service and help us save more lives in London.