Living in Woking, Surrey, with his wife and two children (aged 13 and 22), Peter was expecting a normal day at work on 22 July 2021. But when helping some of his colleagues unload a large piece of equipment off a lorry, a serious accident occurred.

As the 600kg box was lowered down from the pallet truck, it slipped. “In that moment, you don’t have time to think,” said Peter. “So I put my arms up in the hope I could stop it from falling and push it back.

“The piece of equipment just slid off and toppled onto me. I was underneath it, concertinaed to the floor. Luckily it wasn’t higher, as it would have killed me, and I’m also lucky my head wasn’t underneath.”

Peter’s colleague used a forklift to lift the equipment off within 30 seconds, but the initial damage was done. “I just lay there while someone called an ambulance. I remained conscious but I wasn’t aware I had broken something, let alone how bad it was.”

Within minutes, London’s Air Ambulance’s advanced trauma team were in the air ready to provide rapid response care at the scene. They landed in a nearby park and arrived at the scene. The unique pre-hospital skills and expertise they provide meant they could administer Peter vital pain relief and working alongside other emergency services, they prepared him for the journey to St George’s Hospital by land ambulance.

“I don’t remember the journey to the hospital other than a vague memory of sirens. I remember being rolled sideways onto my back and then moving my legs onto the stretcher, which was very painful, but that’s all.” 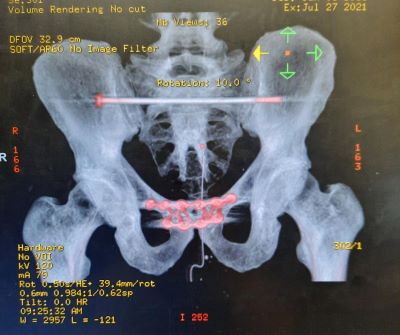 Peter had broken his pelvis and six of his ribs on his left-hand side, and cracked the L1/L2 in his lower back. “There were concerns over would I survive the first night, walk again or need a wheelchair, all of which scared my family.” The day after he arrived, Peter was taken to surgery, which lasted four to five hours. The surgical team had to piece Peter’s pelvis back together, using a large screw in the back of the pelvis and a plate and several screws in the front.
“When the doctor showed me the x-rays of what they’d done to my pelvis, I was amazed. It was incredible what they’d managed to do.”

Peter remained in the ICU at St George’s Hospital for a few hours before being transferred to a ward. A few days later, a physiotherapist visited and told Peter: “We’re going to stand up today”.

“That was day one of physio,” said Peter, “and my recovery began there.

After three weeks in hospital, Peter was allowed to go home.

“I still attend physio at St George’s once a week and I have a home programme of daily exercises. Finally, last week I gave back my crutches! I can climb out of the shower, I can drive and I can walk around. I try to walk two to three kilometres a day when I can.”

Peter described how the longer he was off work, the more he didn’t want to go back. “It was hard to go back, but you have to make that leap and go for it. Once you’ve done it, it’s okay. I’m now back at work three days a week in the office.”

London’s Air Ambulance’s trauma team were able to attend Peter’s accident with speed, stabilise him and provide pre-hospital treatment at the scene when every second counts; increasing Peter’s chances of a good recovery. Channel 4 have recently aired a documentary called “Emergency”, featuring Peter, the London’s Air Ambulance team and other frontline trauma services to help spread awareness of the life-saving work that occurs every day in the capital.

“I just want to reiterate how brilliant the medical teams were, that’s my overriding reason for being in the documentary,” said Peter. “From the ambulance crew, to the ICU staff, to the ward nurses, everyone involved was absolutely fantastic.

“We need to spread more awareness on the trauma service as you never realise how much is involved until you’re in it. I’d heard about the London’s Air Ambulance before but didn’t pay a lot of attention to it. You watch the odd programme on telly or you see them on the motorway, so you know they’re there, but it’s hard to get a full appreciation of what they actually do until you witness it. I can’t put into words the gratitude I have.”