On 20 July 2017, 26 year old Rory was walking home post gym session, when a car mounted the pavement at 60mph and hit him from behind, throwing him 30ft into the road.

“I was walking along a road in Clapham but I had my headphones in, so I didn’t hear anything before I was hit,” said Rory.

The car continued speeding down the road, leaving Rory almost lifeless in the middle of the road.

Matt said: “It was horrific to see – almost as if time slowed down as the car mounted the pavement and threw him into the road. I actually felt helpless as I didn’t have any kit with me that I’d normally have, so all I could do was support his airway and keep his spine stable whilst waiting for the ambulance to arrive.

“The aircraft was overhead within minutes and it was a relief to see the HEMS team because I could tell he was critically injured.”

Our crew landed on Clapham Common and arrived at Rory’s side to find him with a coma score of three to four. To protect his critically injured body, they sedated Rory immediately and administered a life-saving blood transfusion. He was then able to be transported to Kings’ College Hospital by land ambulance.

“I had broken pretty much my whole body,” said Rory.

Rory’s injuries included a compound fracture (which is when there is an open wound at the site of the broken bone) to his left femur and right humerus, fractured vertebra and a broken scapula. He was also suffering from flail chest, which is when a portion of the rib cage is separated from the rest of the chest wall.

Rory’s jaw was so damaged he later required TMJ replacement surgery, which is a surgical procedure that involves replacing the joints between the lower jaw and the base of the skull with custom-made prosthetic joints.

Rory had also hit his head badly, which resulted in a brain bleed. Luckily this resolved itself without surgery. 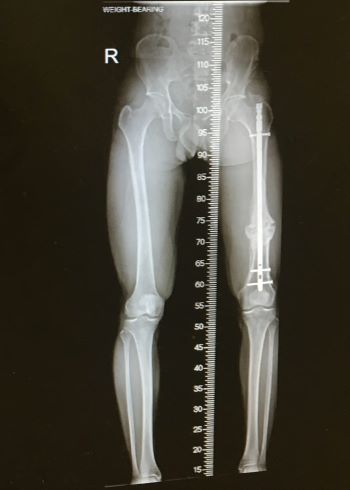 The extent of his injuries meant Rory remained sedated in ICU for two weeks, which was followed by three months in hospital.

“It was a really painful time,” said Rory. “I don’t remember a lot as I was sedated often, but I remember the pain.

“My cognitive ability was not good and I suffered from amnesia for quite a while, but luckily I came out of it.”

Once the mental abilities had returned, Rory then began to focus on the physical recovery. “Physically it was quite the journey. I had appointments and rehab for almost every part of the body.”

With four years of rehab and determination, Rory has made an incredible recovery and has been officially discharged from all physio.

“I am doing well, but I’m not the same person I was – I never will be – and that’s quite hard to accept. But I’m doing better at accepting my weaknesses.”

One of Rory’s legs is now shorter than the other, meaning there is a slight limp if he isn’t using a heel raise. He also suffers from random bouts of aching in his shoulders and arms, due to the previously broken scapula. “My memory isn’t always the best, but my issues are manageable and I’m working on them. I know I’m pretty lucky!”

A year after his accident, Rory and his partner Andy arranged a gala ball to fundraise for London’s Air Ambulance Charity. A formal evening involving a band, dinner and a raffle, Rory and Andy raised £4,689 for the service that saved Rory’s life.

“It was amazing to be able to say thank you to the service that saved me.”

Matt said: “It’s lovely to hear Rory has recovered so well. Seeing his accident definitely spurred me to apply to work with London’s Air Ambulance.”

Now living in South East London with their dog, Rory and Andy are engaged to be married in February. Following a proposal in Wales, they are heading to New Zealand for their wedding. We’re so glad Rory has made such an impressive recovery and wish them all the best for the future.