On 7 April 2016 Yair had a decision to make. He could carry on cycling straight home or he could turn right and enjoy a longer ride. He was in no rush to get back, so he decided to turn. Moments later he was knocked off his bike and run over by a passing car.

Yair’s pelvis was crushed and he was bleeding internally. Passers-by called 999 and paramedics from the London Ambulance Service quickly arrived on scene, but they soon realised the seriousness of his injuries and activated London’s Air Ambulance.

“I saw a stationary car sat at the junction on the road coming from the right. I had slowed down on my bike and stopped to turn right. As I was getting ready to turn I let two cars clear the junction and then looked one final time to the right to see the stationary car moving.

“I screamed, he hit me, flipped me on my side and ran me over. I heard a crunch. People started jumping out of their cars. 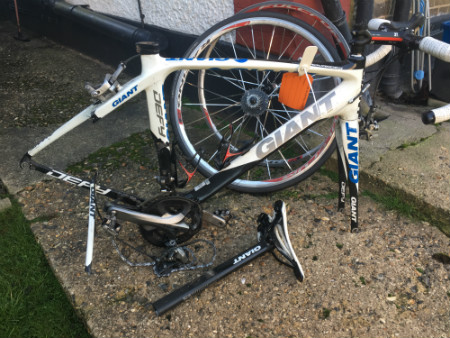 “I was on my side trying to check I wasn’t paralysed by moving my toes and feet. They were fine, so I thought, right – I’ll just sit up, catch my breath, check if the bike is OK, and go home. As I tried to get up, nothing was moving. I realised something really wasn’t right.”

Within 15 minutes of being activated, the London’s Air Ambulance advanced trauma team were by Yair’s side. They gave him ketamine to deal with the pain and prepared him for roadside balloon surgery to control internal bleeding, in case he had needed it. Yair also had an anti-blood thinner administered as he was on Warfarin.

The team alerted staff at The Royal London Hospital to prepare for an incoming patient and airlifted Yair to the hospital to make sure he received further treatment as quickly as possible.

Meanwhile, Yair’s wife Yael was trying to track her husband down.

“I had a phone call at 5 to 8 in the morning. I answered and a woman said ‘hello, I’m here with your husband. He’s had an accident.’

“I jumped out of bed, told our son who was the only one awake that daddy fell of his bike and that I was going to fetch him and got in the car. Although the woman on the phone couldn’t tell me where the accident was, after trying a few hospitals I got there but the road was blocked, so I left the car somewhere and started running. As I was running I saw the helicopter take off.

“I asked someone to tell me what happened, whether he was ok. All they said to me was ‘he’s in good hands.’

“I don’t think there is any other charity that is more about saving lives than London’s Air Ambulance. What they do is absolutely amazing.” 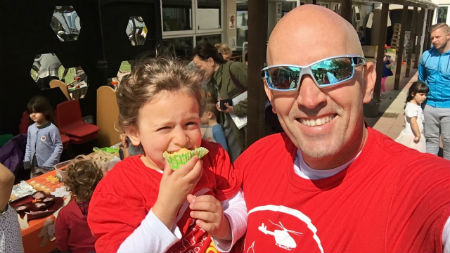 After three complex surgeries to repair his fractured bones and crushed internal organs, several months of hospitalisation and various treatments and therapies, Yair still has a long way to go with his recovery, but he is making excellent progress with help from Yael, their three young children and friends.

“If it wasn’t for London’s Air Ambulance and the trauma team at hospital, I might not be here today. We are now 11 months since the accident and I am back on my feet. I go out walking a lot – almost daily between 3-5km a day and I take every opportunity to get fitter and stronger every day. The kids join me. They are very excited to be part of my recovery. Two and a half years ago I had an open heart surgery so we thought we knew how to deal with recovery. I am told I am very determined. That’s what I know.”

At this rate, Yair hopes he’ll be fit enough to take part in one of the next London’s Air Ambulance abseils and raise money to make sure this service can continue its vital work, saving more lives and keeping more families together.