Paramedics across the UK are being celebrated today (8 July 2022) for International Paramedics Day. To mark the day here at London’s Air Ambulance Charity, we spoke to Lynsey Grant – our Lead Flight Paramedic who is also marking her 20-year anniversary since joining the London Ambulance Service.

Our helicopter operates from dawn until dusk, attending to London’s most critically injured when time is of the essence and we’re proud to have Lynsey working as an integral part of the operation.

Passionate about saving lives in the capital, Lynsey also wants to help inspire young females to become a paramedic.

Why should people consider paramedicine when they’re picking a career?

“It’s definitely a field where you will make a difference – it's dynamic, exciting and when you go into paramedicine, there’s a lot of opportunity to progress into other areas to further your career.

“In any pre-hospital care job, whether you’re a paramedic, part of an emergency ambulance crew or a doctor, every day is different. You wake up that morning and you never know what you’re going to be called to. It’s so varied and interesting. You go from extremes such as delivering babies, to dealing with somebody in cardiac arrest that needs resuscitation.”

How can the paramedicine industry help inspire females looking to become a paramedic?

“The industry is very encouraging. You just have to have faith in yourself. If that’s what you want to do, believe in yourself and just do it.

“We sometimes think that certain industries are more male dominated than others, but paramedicine certainly isn’t – there’s a lot of extremely strong and influential females within the ambulance service.”

What does London’s Air Ambulance look for in a paramedic?

“I think the foundation for any good paramedic is experience. But to apply for a post with London’s Air Ambulance, you need to be five years post registration.

We need people to be dynamic and to be confident in their own abilities in basic ambulance work. We can then teach them all the extended skills that they will need to be part of the air ambulance crew. But we can’t teach them how they will deal with situations on scene or with people that are maxed out because they’ve never seen this extent of trauma. That’s something you can’t teach someone – they have to be cool-headed, dynamic and able to think on their feet.

“This is the feedback we give to a lot of people when they come to interview and are not successful – quite often they don’t have enough experience – they'll get there and probably on the next intake they will be successful. You don’t want to recruit someone that’s not ready.”

What is the highlight of your 20-year long paramedic career so far?

“Joining London’s Air Ambulance was a massive achievement – but I do feel so privileged to have joined the London Ambulance Service – it has given me lots of opportunities.

“I have taught resus to some amazing people, at some incredible venues – I taught the beefeaters at the Tower of London, I showed Prince Charles how to use a defibrillator when he visited the HQs, I met Prince William at London’s Air Ambulance Charity’s gala – some really lovely people that you wouldn’t get to meet in a lot of jobs.

“The patients and the relatives – some of them touch your heart and you won't ever forget the cases.

“Joining the team here is great, you learn so much, it is such a steep learning curve. You’re with some of the best doctors, consultants and paramedics – they teach you something every day. We’re a very close knit team.

“Being in this role now as Lead Paramedic, I see a lot more than I did before, because I’ve got the advantage of coming to London’s Air Ambulance Charity’s office in Mansell Street, which has allowed me to work more closely with the charity team.”

Do you plan on doing another 20 years in the field?

“Twenty years is a long time! This job is, whether you're a paramedic on an ambulance or an air ambulance, physically demanding. It is physically challenging – lifting patients, moving them out of spaces, carrying the kit; it takes a toll.

“I definitely won’t be moving into any other area; I wouldn't leave for another job because I’d get bored. I love the variety of this job. But whether I will still be doing frontline work is different. Now I have teaching experience and that’s definitely something that I love doing. But I’ll stay in the NHS – if I have to work that long, hopefully I will win the lottery before then!”

Anything else to add?

“I feel extremely lucky to have joined the ambulance service – it's given me so many opportunities and I’m chuffed there is now an International Paramedics Day! For it to fall on the same day as when I joined is fate.

“Anyone who wants to go into paramedicine, I’d strongly recommend it.” 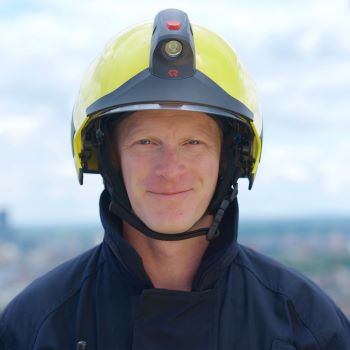 On 4 May 2022, to celebrate International Firefighters’ Day, we spoke to Mark Drewitt, one of the five fire crew at London’s Air Ambulance.

Working from our helipad, Mark has been with us since 2018.

He told us what it’s like to be part of the London’s Air Ambulance crew, and how he found himself working on top of Europe’s tallest helipad.