Yesterday evening, our advanced trauma crew attended the UK premiere of Top Gun: Maverick, as a thank you for their work looking after the capital.

Pilots, doctors, paramedics and fire crew from London’s only helicopter emergency service walked the red carpet at the event in Leicester Square: a change from their usual day treating the capital’s most critically injured patients.

The crew wear helmets whilst flying, some of which are named after the Top Gun nicknames, including Maverick and Iceman. At the event, the crew wore their flight suits as they met celebrities and the stars of the film.

Our Patron, HRH The Duke of Cambridge, also attended and spoke to the crew, including Dr John Chatterjee who met the Duke when he joined the Royal Foundation mental health roundtable event in November 2021.

“We are very grateful that the work London’s Air Ambulance crews do day in and day out to give traumatically injured patients the best possible chance of survival has been recognised by Paramount and the Top Gun team.

“Our helicopters can get anywhere in London within 11 minutes, and in over 33 years London’s Air Ambulance has treated over 43,000 patients, taking expert rapid response care to a patient’s side when time is critical.

“We can only keep flying to these patients thanks to support from the public though. The backing of Paramount at events like this gives us a vital opportunity to raise awareness of our need for donations, with a total cost of £10 million needed to keep the service going each year.” 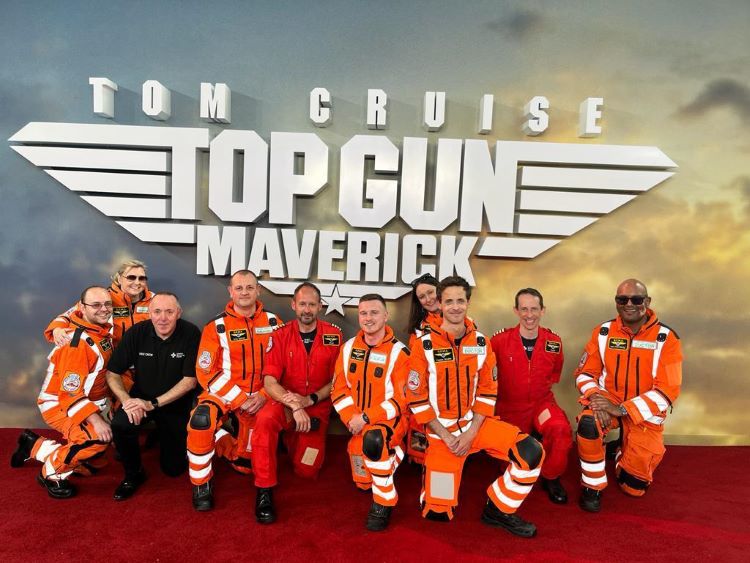