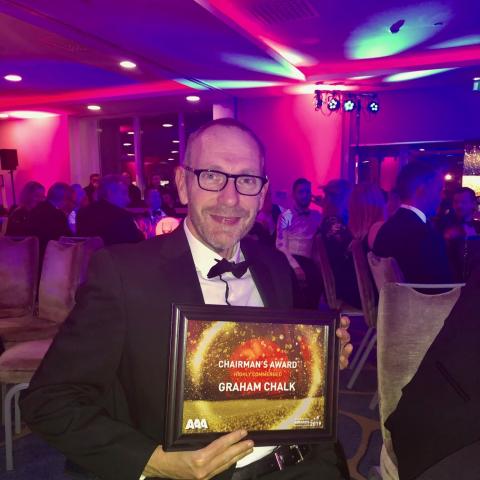 The awards ceremony, hosted by Good Morning Britain presenter Charlotte Hawkins, celebrated the achievements of air ambulances up and down the country. The audience heard inspirational stories of individuals and teams throughout the evening, and we are proud to have been nominated alongside these incredible crews, staff and volunteers.

Our Chief Pilot, Neil Jeffers, was awarded Pilot of the Year for his service to our charity. Neil has been Chief Pilot with us for four years, and earlier this year he flew with HRH The Duke of Cambridge to launch our 30th Anniversary celebrations.

Neil frequently goes above and beyond, last year he completed 14 desert marathons to raise money for our charity including the infamous Marathon des Sables.

Graham Chalk, Paramedic Education & Development Lead at London’s Air Ambulance, received a Highly Commended Award from the Chairman of the Association of Air Ambulances (AAA) for his long and dedicated career with us. Graham first joined London’s Air Ambulance as an advanced trauma paramedic on secondment in 1997. He has since led on paramedic education and development, overseeing governance processes to ensure high quality paramedic practice. Graham has selected, trained and mentored hundreds of paramedics over the years.

In addition to the two current team members, Professor David Lockey, a consultant with London’s Air Ambulance who is currently on sabbatical working with Wales Air Ambulance, won a Lifetime Achievement Award. Professor Lockey was a registrar with us in 1997 and 2000 and has been a consultant with our charity since 2001. He is one of the leading air ambulance doctors in the UK and the first Professor of Pre-hospital Emergency Medicine.

A total of 12 awards, which are independently judged, were given to outstanding individuals and teams from across the air ambulance community. This included pilots, paramedics, doctors, fundraisers and volunteers from across the country.

“It is an honour to be receive a Highly Commended award from the Chairman of the Association of Air Ambulances. I first joined London’s Air Ambulance on secondment in 1997 and it has been a privilege to have achieved so much with them over these years. These awards are particularly meaningful as the recognition is from peers who understand the challenges of the industry.”

“It is a privilege to be Chief Pilot with this fantastic charity and I’m thrilled to have won such a prestigious award.

The level of dedication of operations crew, volunteers and charity staff is clear to see across all air ambulance teams, and it was brilliant to see this showcased at the awards ceremony. I know we all take pride in what we do to help people on what could be the worst day of their life.”