Arriving via helicopter and rapid response cars, London’s Air Ambulance provided pre-hospital care across the capital, with Newham, Lambeth and Wandsworth being the busiest boroughs this month.

Alongside other potentially life-saving interventions, our doctors and paramedics performed 43 ultrasounds, 21 rapid sequence intubations, six blood transfusions, three femoral arterial lines and one thoracotomy at the roadside. A procedure called REBOA was also performed once during the missions in March: REBOA stands for resuscitative endovascular balloon occlusion of the aorta, and is balloon surgery that can help control internal bleeding. London’s Air Ambulance performed the world-first pre-hospital REBOA in 2014. 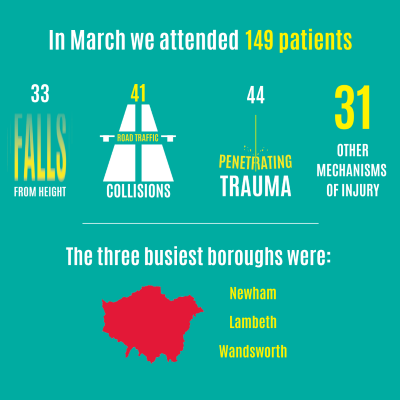 The most common mechanism of injury was penetrating trauma, which resulted in 44 patients in March (30 per cent). There were 41 patients injured due to road traffic collisions (27 per cent), 33 to falls from height (22 per cent), 21 due to other mechanisms of injury (14 per cent) and 10 medical emergencies (seven per cent).

The majority of patients were taken back to The Royal London Hospital (40 per cent) – which is also where London’s Air Ambulance recently upgraded helipad space is located – with 27 per cent of patients being transported to St. Mary’s, 15 per cent to St. George’s Hospital and 14 per cent to Kings College Hospital.

Our advanced crew also treated 149 patients in January 2022 – if you’re interested in how these figures compare, read the monthly mission report.

London’s Air Ambulance brings the hospital to the scene to deliver urgent, cutting-edge medical care. It is because of our amazing supporters that our teams are able to get to patients when time is of the essence. Will you help us be there for all those who need us?