Firstly, as the Chief Executive Officer at London’s Air Ambulance, it’s a great privilege to stand before you this evening and I’d like to extend my own personal welcome to all of you, who have come out in such numbers to support London’s Air Ambulance again, for what is becoming one of our most important events in our annual calendar. We have asked much of our supporters over the year, and it is genuinely heart-warming to see so many of you here again this evening.

On doing my research, I found some very interesting parallels between the church of St. Andrew Holborn and London’s Air Ambulance! This church is steeped in charitable tradition, dating back over many centuries, so it feels a perfect setting for our Christmas Carol Service tonight.

St Andrew Holborn was also the founding place for the Royal Free Hospital, when in 1827, William Marsden found a dying woman on the steps of the church, and felt compelled to establish a hospital nearby, which ultimately became the Royal Free. The convergence of charity, medicine and caring for people is a rich part of the heritage therefore for both the church and indeed for London’s Air Ambulance. 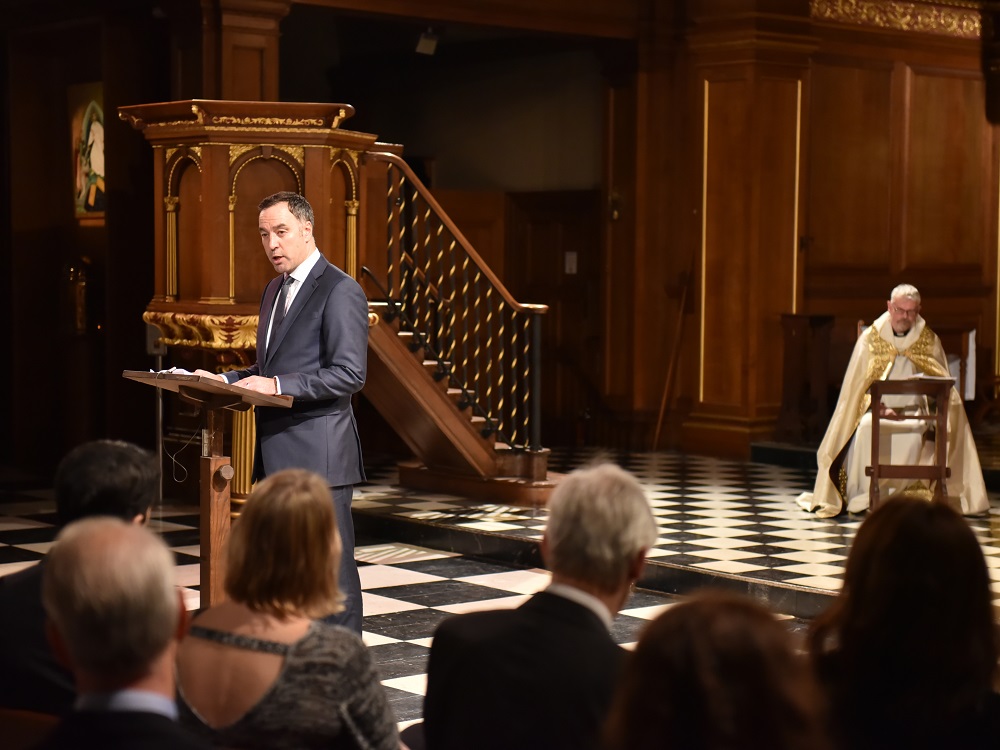 William Marsden trained as a surgeon at St Bartholomew’s hospital, now part of the very same Barts Health NHS Trust that we partner with, and he described the hospital he created — the London General Institution for the Gratuitous Cure of Malignant Diseases — as one where ‘only poverty and sickness were the only passports.’

Not everything has been plain sailing for our charity over its 27 year history, and there are numerous occasions where the service has had to demonstrate resilience and determination, just like this historic place of worship. St. Andrew Holborn Church was ravaged by fire in 1666 in the Great Fire of London, and was only redeemed at the last moment by a fluke change in the prevailing wind direction. The church was restored by Sir Christopher Wren himself; dare I suggest another iconic London brand!

The church was also bombed during the Second World War, but it was agreed that it should be restored ‘stone by stone and brick by brick’ to the original Wren design, and reopened in 1961 as a ‘Guild Church’ — a church without a parish designed to look after the local working community. Likewise, I feel that London’s Air Ambulance is a charity without boundaries (at least inside the M25), that acts always in a completely non-discretionary way and delivers a service that is designed to look after every community in London — sickness the only passport indeed.

Father Young, thank you again for so generously hosting us this evening.

Since our last carol service, the charity has treated a further 1,852 critically injured people across London, and whilst our medical crews and pilots attend to our patients often in their darkest hour, the teams also witness compassion and humanity within London’s communities on a daily basis.

It is often said that London can be an unfriendly and uncaring place, where people are simply too busy to interact and care for the people that they spend their daily lives with, but equally, it is remarkable how complete strangers can come to the aid of those who have suffered from traumatic incidents across the capital; and we witness that every day.

Such was the case with Andy, one of our ex-patients. An on-duty police officer, Andy was hit from behind while riding his motorcycle on a roundabout. He was thrown from his vehicle and collided with a sign at the side of the road, suffering a traumatic amputation of his right leg and breaking his ribs and an arm. Bystanders immediately dialled 999 and placed a tourniquet on his leg. Within minutes, London’s Air Ambulance arrived and anaesthetised Andy on scene.

Andy remembers the team that looked after him at the roadside and given his own line of line of work, was unfortunately no stranger to helping on scene at tragic road traffic collisions himself. Andy has said to me on numerous occasions how grateful he is to London’s Air Ambulance and for the care he received. He knew his injuries were very serious and he credits the service with saving his life. He asked me to extend his sincere thanks to those who support, volunteer their time and donate to London’s Air Ambulance as without your support, the aircraft would not be able to fly these life-saving missions.

Andy was flown to The Royal London Hospital where he underwent a number of operations and remarkably, with the support of his wife and children, he has since returned to work.

We all know that the world is a very uncertain place, particularly right now, and the horrors of that tragic night in Paris just a few short weeks ago, along with other atrocities across the world this year, remain all too vivid in our memories, and certainly feel worryingly close to home. The London’s Air Ambulance team, alongside our friends and colleagues in the London Ambulance Service and other emergency services are ready to respond to such an incident should an attack, God forbid, take place here in London. We (rightly) talk often about the amazing medicine that’s performed by the service on scene, for the benefit of our patients, but we say less about the dangers that all of the emergency services personally accept, on our behalf and as part of their daily routine. They are trained and willing to go above and beyond the call of duty to support major incidents such as the one we witnessed just across the channel in November. I’d like to take this opportunity to praise them for their dedication and selfless commitment in looking after all of us in London, every single day, often at great personal risk to themselves and their colleagues. It’s a remarkable thing you do and I’m sure I speak for everyone here in expressing our respect and gratitude.

As Christmas approaches once more, that sense of community and service seems increasingly important in these troubled times. As 2015 draws to a close, we are thankful to be able to look back on a very positive year for the charity overall. We feel very fortunate that our star has been in the ascendancy and as a direct result of the gifts you have delivered, we have been able to realise the promises we made to you in recent years. Hopefully you will have seen the stories in in the press about our recent purchase of a second emergency medical helicopter for London. I’m delighted to say that the aircraft is in the UK, and is undergoing its final preparations to be operational early in the new year. To paraphrase the Bishop of London at our carol service last year, there will soon be two angels we can call upon to drop out of the sky when they are needed most.

We were also able to fly extended daylight hours this year; all the way to sunset every single day in the summer, and we were able to dispatch our medical teams to a further 67 patients by helicopter as a result — an angel indeed.

As I’ve already said, none of these achievements are possible of course without you, our supporters. Christmas is indeed a time to be thankful and behalf of all us at London’s Air Ambulance, please accept my gratitude and appreciation for everything that you done, and continue to do, to support this life-saving charity.

Of course, our operational teams won’t get the chance for the traditional seasonal break that so many of us get to enjoy over the festive period, and our doctors, paramedics, pilots and fire crew will work tirelessly around the clock to support those in need. My particular thanks to you. London is indeed in the safest possible hands.

One family who are particularly thankful to London's Air Ambulance this festive season are Doris’. Doris was cut free from the wreckage of her car on New Year’s Day this year. She broke her neck in two places and suffered serious internal injuries, not least the severe bleeding into her abdomen which very nearly killed her. As Doris bled internally, her vital organs started to gradually fail. Her lungs collapsed first and her heart was in danger of arresting at any moment.

Doris tells anyone who cares to listen that London’s Air Ambulance was at her side in minutes and she was given a blood transfusion — right there in the street. Her lungs were also re-inflated on scene and she was escorted in a road ambulance with our doctor on board and our paramedic in convoy to the major trauma centre at St Mary’s hospital. Had her heart stopped on the way, the team were prepared to pull-over in the ambulance and perform open-heart surgery on the pavement.

Doris woke up from her coma about a week later, having had several life-saving operations; the hospital staff had gathered by her bed as they hadn’t really expected her to come out of theatre alive.

Doris is doing really well and has now taken retirement from the High Street bank she worked for and just like Andy, Doris wanted me to pass on her thanks to all of you for helping to save her life. She said she would have died on the road that New Year’s Day if it wasn’t for London’s Air Ambulance and all those who support the charity.

As Luke said in his gospel: “The Advent/Christmas season is often marked by generosity and charity and by an ambiance of peace and goodwill.”

…It’s here in abundance tonight; perhaps he meant an air ambiance of peace of goodwill?!

I wish everyone a safe and peaceful festive season and a healthy and prosperous 2016.