Paying tribute to his run-loving father, Peter Arnold and 29 members of his family and friends, ran the London 10K on 2 May 2022; celebrating Geoff’s life and raising money for London’s Air Ambulance Charity.

In June 2021, on a Saturday after watching a rugby match, Geoff had a tragic accident in Victoria Train Station; losing his footing on the escalator and falling head first. The advanced trauma team at London’s Air Ambulance was dispatched and arrived on scene within five minutes. The team resuscitated Geoff and transported him to St Mary’s Hospital, where he remained in ITU for five days. Sadly, his injuries were too extensive, and Geoff passed away on the Thursday.

“It is because of you we had the opportunity to say goodbye to Dad.”

Geoff had always been an avid runner: every year for the past 12 years he would pick a member of his family to join him in the London 10K as his birthday present. 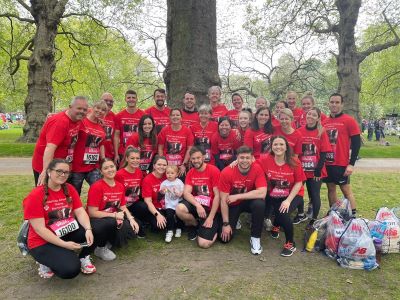 “His birthday is 25 May, so the London 10K was always his chosen pressie,” explained Peter. “Everyone’s done it with him: myself, his wife Tina, my sister, his step daughters and a couple of his grandkids; everyone! I even did the London Marathon with him in 2003 for his 60th birthday and in his 70s, he was still doing triathlons!”

So, for this year’s London 10K, both northern and southern families of Geoff – a total of 30 people – decided to together run the London 10K in his honour.

“We thought it was really fitting to do it all together. It was superb: a really good and emotional day, Dad would have loved it,” said Peter.

There were a lot of first-time runners, but they joined in without complaint. One of Geoff’s granddaughters was also 20 weeks pregnant, but regardless, everyone completed the run in memory of Geoff.

We’re so thankful to all of the runners for their incredible effort. If you’d like to fundraise for us, please get in touch at [email protected].

“This is exactly what Dad would have wanted,” said Peter, as he promised to make the annual run a tradition.

“It’s a pleasure to be able to thank the service for all their hard work, dedication and care that they undertake on a daily basis.”