“Last term’s theme for the children’s activities was ‘people who help us’,” explained Reception Lead, Shifa. “We spoke to the children about doctors, nurses, vets, dentists, cleaners, bin collectors and more.

“When playing outside, a group of the children spotted London’s Air Ambulance’s helicopter in the sky and wanted to meet the crew who are there for their community.” 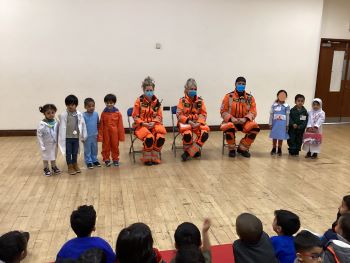 When the advanced trauma team visited the children, they were met with thank you cards, hand-made letters and an array of brilliant costumes.

“The children made it very clear they wanted to dress up as a mini air ambulance crew to surprise our visitors. Everyone was so excited!” said Shifa.

Rainbow House Preschool is an independent provider of a range of services for children under eight, initiated by local women in 2001 and part of the East London Mosque & London Muslim Centre. 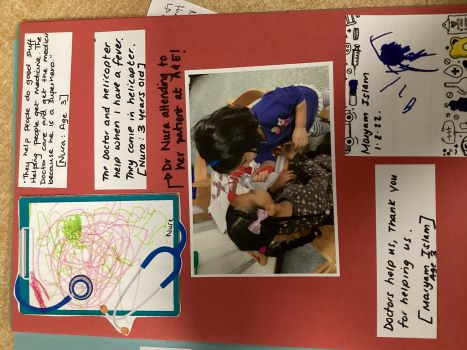 Integrating with its local community is a key part of the organisation. “Our new creative curriculum has a specific section on ‘me and my community’.

“We know London’s Air Ambulance Charity relies on its community to be able to provide this vital service and we wanted the children to understand that too,” said Hamida.

After the visit, Andy and Lynsey shared the pictures and cards with the rest of the crew on the helipad, while the children said how they wanted to grow up to be doctors and pilots, just like them!

Andy said: “It was lovely to meet the children: they were so polite and kind. They gave us some wonderful homemade cards and artwork and had some really great questions for our advanced trauma team. I hope they enjoyed the visit and we look forward to seeing them again soon. Thank you so much for supporting and raising money for London’s Air Ambulance Charity.” 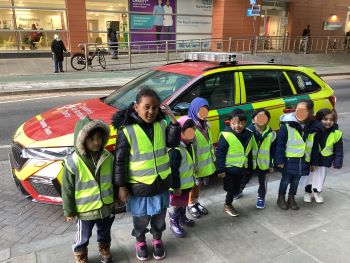 Hamida, Deputy Play Leader, said: “The children always wave at the helicopter and see the trauma and PRU cars on the roads near our site. We recently took them to the London’s Air Ambulance Charity shop in The Royal London Hospital and they chose some helicopters to take back and share with the others.

“As well as this we’ve been doing a little fundraising with the children. The children have raised a fantastic amount of £768!”

London’s Air Ambulance Charity is there, every day, for the people who live, work and travel in London. The advanced trauma team take the hospital to the roadside for London’s most critically injured patients. If you’re interested in community fundraising, please don’t hesitate to get in touch via [email protected].