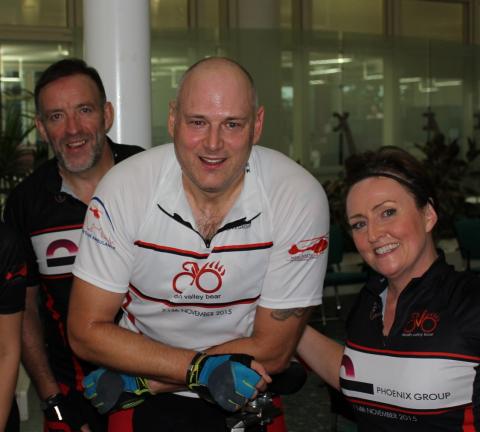 Cycle enthusiast, Paul Heath, will be riding across the United States’ ‘Death Valley’ later this month, to raise funds for us and Midlands Air Ambulance Charity.

Paul, a 46 year old Solihull resident, will be covering a total distance of 382km in five days. Located in Eastern California, the valley is the hottest and driest area of North America, and renowned for being home to one of the toughest cycle routes in the world.

“Death Valley is one of the most dramatic and demanding environments on the planet,” Paul said. “It has mountain ranges towering up to 11,000ft — the equivalent of Ben Nevis, Scafell Pike and Snowdon stacked on top of each other — then dropping to 282ft below sea level at its lowest point. Its November temperature varies from 36°C at its hottest to -3°C at its coldest. To say this is going to be difficult is an understatement.”

Paul is an employee at life and pensions provider Phoenix Group, which has raised over £280,000 for both charities to date. Together with company matching, its 750 staff members regularly go that extra mile for their chosen charities. Just last month employees joined Paul in a 12 hour static cycle to support his challenge.

Talking of his training so far and his journey ahead, Paul said: “I’ve been riding my bike for anywhere between 20 to 40 miles four times a week, supplemented with strength and endurance sessions in the gym. I’ve also been sitting in a sauna to get use to the hot, dry environment. The difference is that you can escape a sauna if you want — in the Valley you can’t!

“The hardest part of the challenge will be days two and three. The ride distance is around 50 miles each day, but the ascent is the bit that will be really tough for me — with upwards of 5,000ft climbing within the first 25 miles on both days.”

Reflecting on his visit to our helipad at The Royal London Hospital in Whitechapel in late September, Paul said: “I felt privileged to have met the folk who dedicate their time to helping save lives. I didn’t really give too much thought to the small difference my challenge might make before this. Here I saw how it will help first hand and now I am in awe.”

A spokesperson on behalf of London’s Air Ambulance and Midlands Air Ambulance Charity said: “Our partnership with Phoenix Group and the commitment of their staff has been significant in helping us save more lives. We are staggered by their support, and on behalf of all of us at both charities, we wish Paul the best of luck on his brave challenge.”

Paul has already beaten his £5,000 fundraising target and people can continue to donate at his Virgin Money Giving page. Embarking on his challenge on 7th November and returning to the UK on the 14th, you can follow his trip updates at www.deathvalleybear.com or via Twitter @dv_bear.