Alongside many other life-saving procedures, the crew administered 40 ultrasounds, 26 rapid sequence intubations, seven blood transfusions and two thoracotomies at the roadside. They also performed REBOA once during the month: an innovative procedure that involves balloon surgery to control internal bleeding. The world’s first use of pre-hospital REBOA was performed by London’s Air Ambulance in 2014.

Arriving in both helicopter and rapid response care – depending on time of day and weather conditions – London’s Air Ambulance attended accidents across the capital, with Southwark, Lewisham and Lambeth being the busiest boroughs this month. 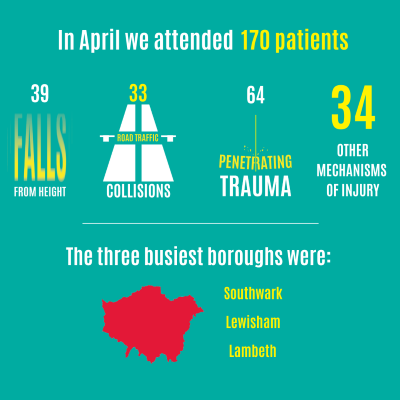 The most common mechanism of injury was penetrating trauma, which resulted in 64 patients. There were 39 patients injured due to falls from height, 33 from road traffic accidents, 19 from other mechanisms of injury and 15 from medical emergencies.

If you’d interested in how these figures compare to a year’s worth of missions, read our 2021 annual mission report.

London’s Air Ambulance brings the hospital to the scene to deliver urgent, cutting-edge medical care. It is because of our amazing supporters that our teams are able to get to patients when time is of the essence. Will you help us be there for all those who need us?