On 6 May 2022, nine CBRE employees walked over 11 miles to raise money for London’s Air Ambulance Charity.

CBRE is a leading organisation in commercial real estate services and investments, in which fundraising for charitable causes is encouraged.

“Everyone is given charity days, and we’re focused on contributing back to the communities that we work in,” said Lloyd Pym, Account Manager at CBRE and one of the walkers. “That’s one of the reasons we chose to support London’s Air Ambulance Charity.”

A total of £2,216 – enough to fund a whole mission – was raised by the walk, that took the group a total of three and half hours to complete. “It was a lovely, really sunny day,” described another walker, Richard Furness, Contract Supervisor. “A great day out that everyone enjoyed.” 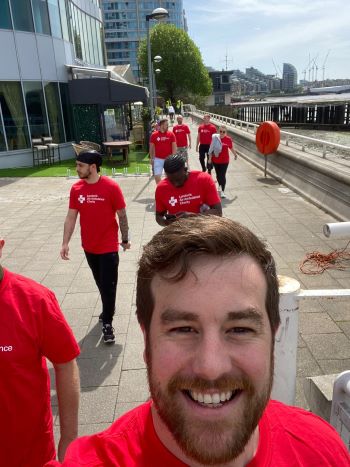 “Especially with drinks at the end of the walk!” added Lloyd.

Following this event, both Richard and Lloyd look forward to doing more fundraising in the future. If you’re interested in organising a fundraising day with your company, please reach out to [email protected].

“The support we received from London’s Air Ambulance was impressive,” concluded Lloyd. “It made the fundraising aspect really easy and fun for us.”

On a less picturesque day in March, through wind and rain, a sales team from CIPHR travelled on foot from Hampton Court Palace to Tower Bridge to raise vital funds for London’s Air Ambulance Charity, who had attended to a colleague of theirs in 2020. Read their fundraising story for more inspiration.