During 1-16 May 2022, Stephen Russell walked the Pennine Way, alone, to fundraise for London’s Air Ambulance Charity.

Carrying everything he needed on his back – which varied between 12-14kg – Stephen completed Britain’s first National Trail, taking him from the Peak District to the Scottish Borders.

“It has always been something I’ve considered doing,” said Stephen. “The experience was arduous, interesting, dangerous and exhilarating!”

With long walks, such as the Cotswold Way and Yorkshire Wolds Way (100 miles each), under his belt, Stephen was prepared for the challenge of the 268-mile long Pennine Way. 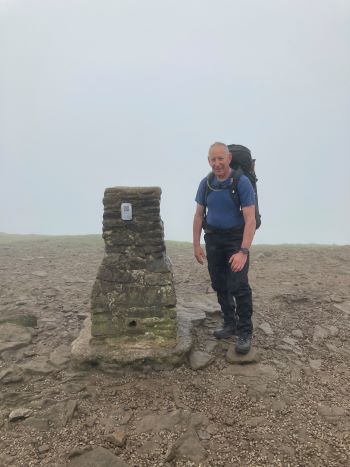 “I ended up doing a few extra miles, totaling 277, due to walking to accommodation,” explained Stephen. “But it was very enjoyable. I liked being on my own just ambling along.”

Overall Stephen was gifted with good weather, with most days dry and overcast. But extreme wind and rain hit as Stephen endured Pen-y-ghent. “The last 10m of scrambling was difficult – I couldn’t see the route in front of me because the visibility was so poor. The hand/foot holds were quite high, so I had to move to a less dangerous area to be able to get to the top safely.”

In doing the walk, Stephen has raised over £500 for London’s Air Ambulance Charity, not to mention the standing order he and his wife have donated every month for the last 10 years. 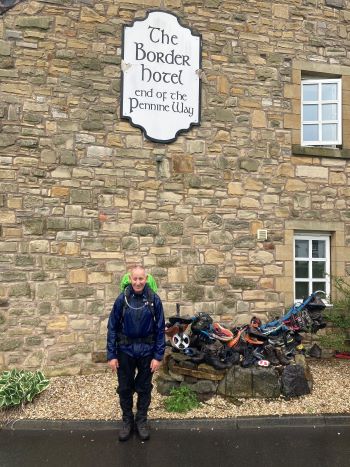 “We live in London and think it’s important to support our local air ambulance and the vital work they do.”

We’re incredibly thankful to Stephen for his impressive fundraising efforts, and look forward to seeing what challenge he takes on next. “I am looking at the Coast to Coast walk next. Maybe next year!”

If you’re interested in fundraising for us, please get in touch via [email protected]. If walking isn’t for you, swimming challenges are often chosen, as you can see by Beckenham Rotary Club’s recent swim-along.