Living in Mile End, near The Royal London Hospital, “we see the London’s Air Ambulance flying quite often” explained Griffin’s mum, Rachael. “Griffin really wanted to do something to help, so we decided to organise a bake sale.”

On Saturday 5 March, in the wind and the rain, Griffin set up his bake sale under the community gazebo. With sweet treats both homemade and gifted by neighbours, Griffin had a lovely array to offer his customers. “We borrowed some tables from our church and everyone came together. I put a message on our community Facebook group and lots of people attended to support Griffin, and London’s Air Ambulance Charity,” said Rachael. 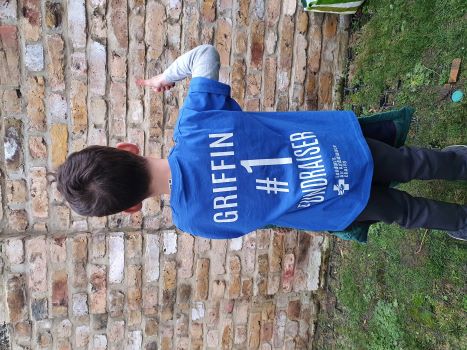 Griffin’s dad has been a paramedic with London Ambulance Service for 12 years and gave Griffin some information on London’s Air Ambulance’s advanced trauma team, helicopter and rapid response cars. The charity gave Griffin some fundraising donation pots, a text-to-give code and some special t-shirts.

“Griffin was thrilled with the t-shirts and the support he got from the charity. Other children wanted to get involved too: our neighbour aged 17 was up very early in the morning baking for the stall,” described Rachael. With homemade chai lattes to accompany the cakes, the day made for a lovely community day, as well as a fundraising event.

With a target of £100, Griffin is overwhelmed that he raised £300 for London’s Air Ambulance Charity! We’re so thankful to Griffin for his fundraising efforts, and hope he managed to save a cake or two for himself!

London’s Air Ambulance is there for every person visiting, working and living in London, 365 days a year. When the worst happens and someone is critically injured, our advanced trauma team responds to bring pre-hospital care to the roadside, when every second counts. We’re there for the community of London, and are thrilled when the community supports our mission to save more lives. If you’re interested in doing some community fundraising, reach out to us via [email protected].